McGregor was replaced in goal by midfielder Ross McCrorie.

Take a bow, Allan McGregor. As sending-offs go, this one is right up there with the strangest we've seen all season.

Into the final moments at Ibrox, his Rangers side were heading towards a 1-0 victory over Hiberninan thanks to Jermain Defoe's goal shortly before half-time. 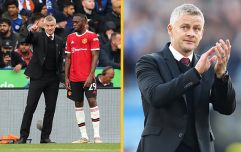 END_OF_DOCUMENT_TOKEN_TO_BE_REPLACED

With the ball in his hands, McGregor appeared to lash out at Hibs' Marc McNulty with his foot after he launched his kick downfield.

To make matters all the more laughable, the goalkeeper then appeared to feign injury immediately afterwards, falling to the floor and clutching at his right ankle.

This didn't stop him from being sent off immediately, meaning Rangers had to finish the game with ten men and with midfielder Ross McCrorie donning the gloves and going in goal.

Thankfully for  McGregor, his teammates were able to cling on to their lead for a fifth win on the spin.

Though the title may have gone to their Old Firm rivals once again, Rangers supporters will hope their strong finish to the season is a sign of a serious title push of their own in 2019/2020.

They will face Celtic for the final time this season at Ibrox next Sunday - a game that McGregor will now miss through suspension.