Adrien Rabiot hires new agent after firing his own mother

Adrien Rabiot was desperate to join Barcelona in January. Barca reportedly offered €40m for the player who had just six months left on his contract, but inexplicably, the deal did not go through, after Rabiot's entourage didn't finalise negotiations.

Rabiot was left unhappy by this series of events that left him cast aside in Paris for the remainder of the season and has consequently recruited a new agent, having previously been managed by his mother.

According to Sport, she had promised her client and son that she would look at Barcelona's offer to finalise the details of the move, but she never did.

Hoping to find a new club as soon as possible, with relations between him and PSG boss Thomas Tuchel seemingly irreparable, Rabiot now has a new agent, who he hopes will secure a summer move to Barcelona.

That move may never happen though after Barca agreed on a deal to sign Frenkie De Jong in the summer from Ajax for a fee that could rise to as high as €86m.

Rabiot has reportedly been in contact with several clubs from England and Italy, but there have been no meetings yet. 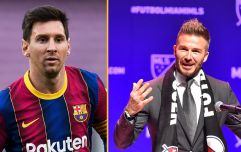 END_OF_DOCUMENT_TOKEN_TO_BE_REPLACED

After Rabiot's people failed to secure the January move to Barça, the club have supposedly taken their offer off the table. If the player still wants to go there, he will have to make the first move. But if he does go knocking on the door of the Nou Camp, their offer will not be as lucrative as the one they passed up this winter.

It's unclear where the Frenchman will end up this summer, but he will not be short of offers. The 23-year-old has bags of talent and has shown as much during his time at PSG. Given he will be available on a free this summer, expect to see several of Europe's elite clubs fighting for his signature in the summer.

Rabiot last played for PSG back in December.

popular
Damien Duff bides his time before roasting the FAI with 'motivational video' comment
"I don't know if the management know what their best 15 is" - Worrying times for Tyrone going into the championship
"They're so far ahead of where I was at 18, it's just off the charts in terms of gym and fitness tests"
Ronaldo removes Coke, shows off the drink of champions in pre-match conference
Can't imagine Rangers fans were happy about what Ronnie Whelan called Scotland
Euro 2020 Quiz: Group F
Chris Harris deftly handles question on his unexpected Lions call-up
You may also like
1 month ago
UEFA open disciplinary proceedings against teams involved in European Super League
3 months ago
You're Erling Haaland - choose your next club
3 months ago
Gerard Pique and Antoine Griezmann involved in heated exchange during PSG defeat
5 months ago
Teammates XI Quiz: Barcelona - 2011 Champions League Final
5 months ago
Barcelona can avoid Liverpool payment if they sell Philippe Coutinho in January
7 months ago
Lionel Messi told "you know where the door is" after questioning manager
Next Page