It hasn't been a bad week for Aaron Connolly.

The former Mervue United striker signed for Brighton and Hove Albion in July but, in the space of three days, he has the Seagulls fans all feeling very, very giddy.

Connolly's just 16 - his 17th birthday isn't until the end of January - and his exploits in the FA Youth Cup, followed by his debut for the club's under-23s show that he is a precocious talent beyond all his years.

A man who never even saw the light of the 20th century, the Republic of Ireland underage sensation is threatening to make the 21st century his own and it couldn't be coming at a better time - what, with the Irish forward production seemingly grinding to a halt.

Shane Long, who turns 30 in a few days, was injured for that qualifier and James McClean was chosen to play up front instead.

But there are men on the way. Men like Aaron Connolly.

In the FA Youth Cup on Friday, Connolly guided Brighton to a 2-0 win over Cambridge to help the under-18s reach the fifth round.

'The Seagulls took the lead on 72 minutes when substitute Cashman played a short pass inside for Connolly, and the striker curled a wonderful effort beyond Iron into the far corner,' the Albion report read.

By Monday, he was fast-tracked into the club's under-23 squad for the first time. The outcome was similar. 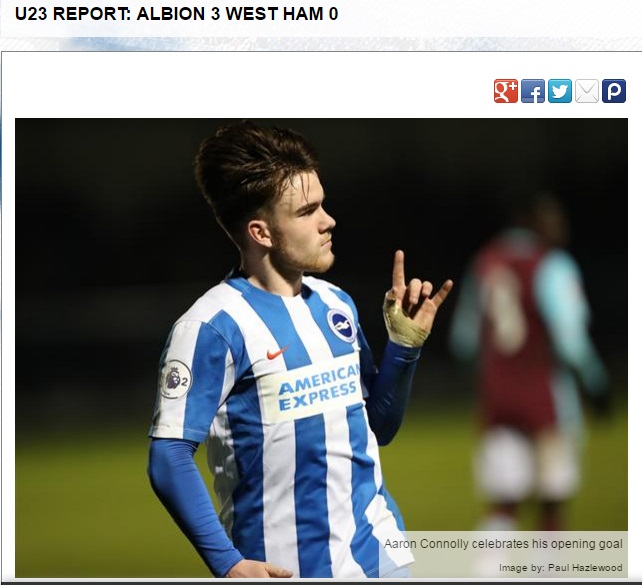 Two goals later and another 90 minutes later, the Irishman has very much caught the eye of fans of one of the best sides in the Championship.

"The Seagulls took the lead after just seven minutes when Connolly latched onto Tom Dallison’s lofted pass forward, and the young striker dispatched into the bottom corner with ease," the under-23 report read.

He scored the first. He forced the second.

"On 57 minutes, Albion doubled their lead when Dylan Barnett’s cross from the right wing was diverted into his own net by Rice, following pressure from Connolly inside the penalty area."

And he scored the third.

"Jordan Davies had an immediate impact after coming on to make his debut for the club, as he set the ball back for Connolly, and the striker bent his effort into the far corner to secure his brace, and Albion’s third, on 74 minutes. "

This kid's got a bright future. And don't the Brighton fans just know it.


popular
James Haskell on text exchange with Peter O'Mahony after Ireland's victory over Scotland
The SportsJOE 12 o'clock quiz | Day 103
Fines and suspensions in Tipperary after stewards enquiry
Can you name the first clubs these players went to after leaving Celtic?
"The academy boys have turned into small monsters over the past few weeks" - Peter O'Mahony
SportsJOE 2000s Football Quiz | Round 8
"I have more work done than any player in Ireland" - The Trevor Giles tribute show
You may also like
1 month ago
You'll be hard pushed to get full marks in this Serie A quiz
1 month ago
QUIZ: Guess the footballer from their Wikipedia page | Irish edition
1 month ago
"I think he kissed the jersey" - Mick McCarthy opens up on Declan Rice
1 month ago
You'll need all your powers to get 20/20 in this 1990s Irish footballers quiz
2 months ago
Can you name Ireland's top Premier League scorers without making a mistake?
2 months ago
Ireland hopeful of November playoff date against Slovakia
Next Page