By the end of June, Liverpool captain Jordan Henderson should be raising the Premier League trophy aloft for the first time.

Liverpool have 18 First Division titles to their names but have yet to top the league - by the end of the season - since 1990. The last time they lifted the domestic title, the Premier League was still two years away and Bruce Grobelaar was owning this green, flecked goalkeeping jersey. 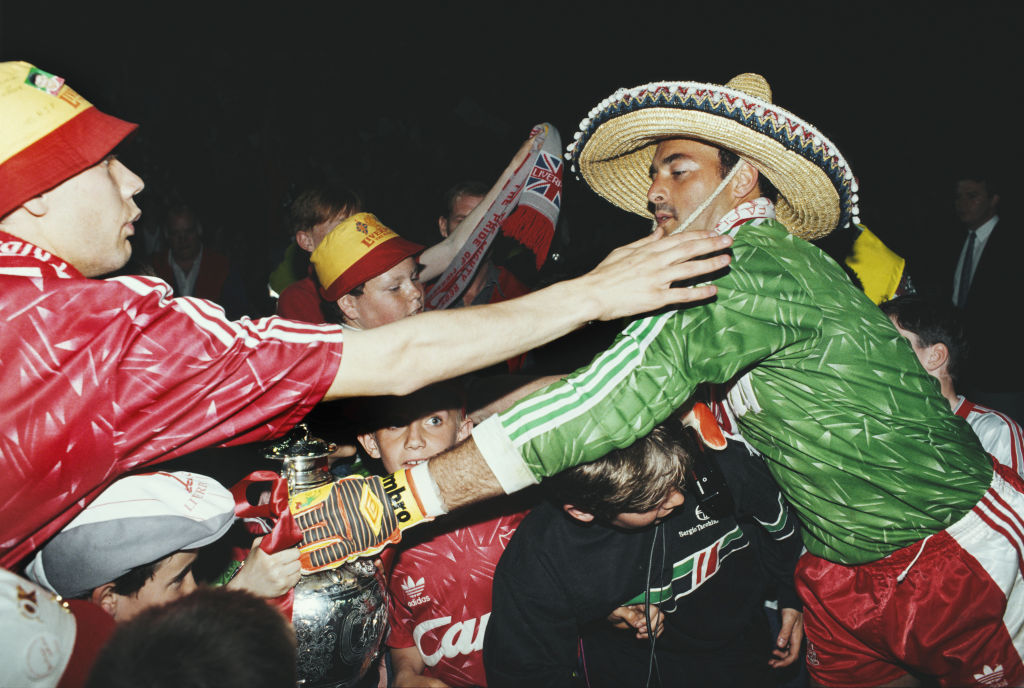 Bruce Grobbelaar shares the League Trophy with fans as Liverpool celebrate the 1990/91 Division One Championship after a 1-0 win over Derby County at Anfield. (Photo by Dan Smith/Allsport/Getty Images/Hulton Archive)

There was always a deep rivalry between Manchester United and Liverpool but the arrival of Alex Ferguson in 1986 set the Scottish cat amongst the Merseyside pigeons. Ferguson set out to knock 'Liverpool right off their f***ing perch'.

By the time the Scot had retired, in 2013, he had certainly achieved that feat. United won 13 league trophies under Ferguson to reach 20 in total and bypass Liverpool's 18. Despite such unprecedented success, Ferguson wrote in his (second) autobiography that he 'could always feel Liverpool's breath on my neck from 30 miles away'.

When you have a team that drive you on so much, and so many memorable battles against them, some players will always stay with you. Hate them, fear them or grudgingly respect them, their names stand out. They evoke an immediate feeling when you hear their name.

This list was compiled with the input from a dozen Manchester United supporters, and there is a sprinkling of personal sentiment included. Here - from 1990 to 2020 - are the 10 Liverpool players Manchester United fans loved to hate. 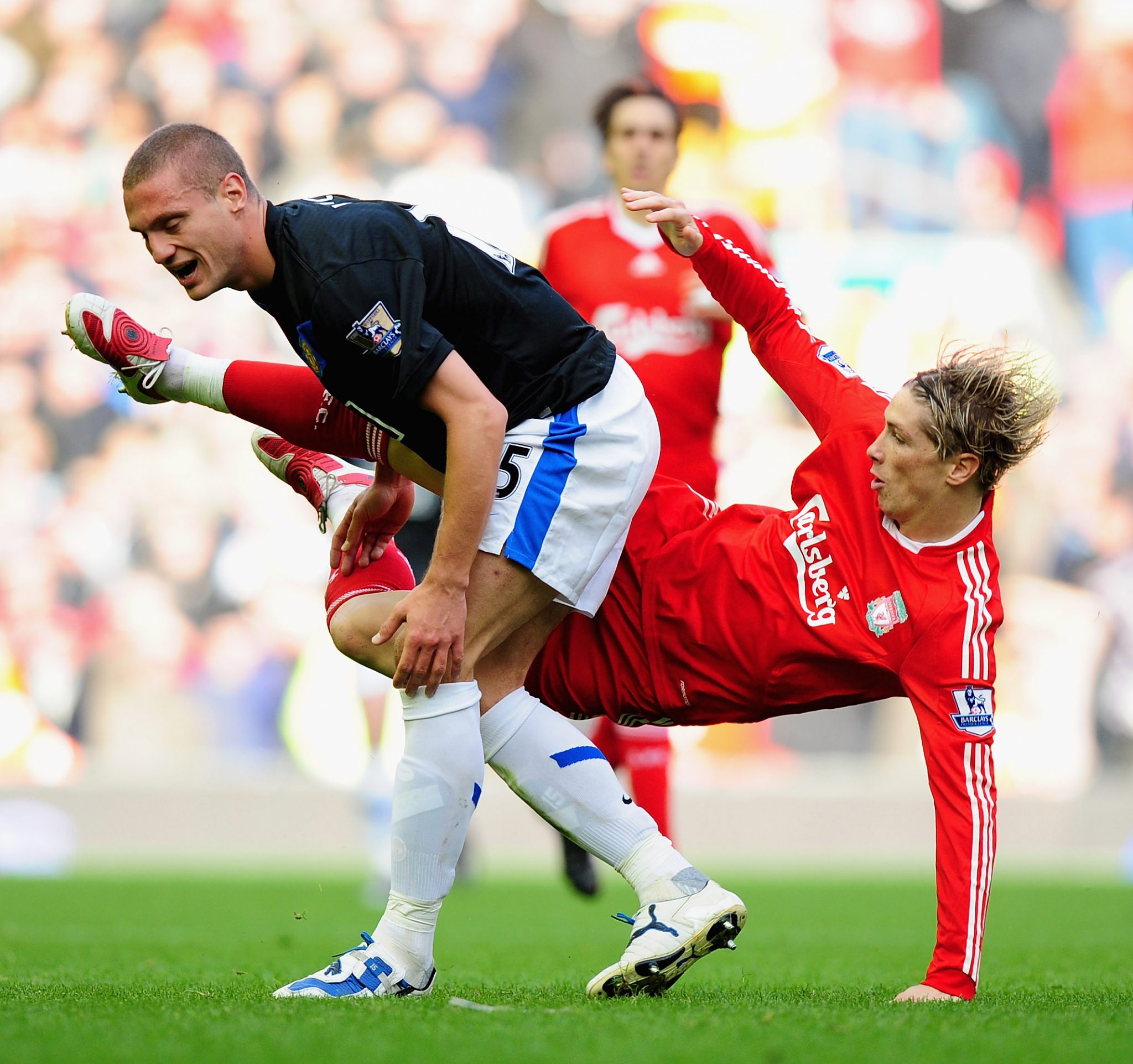 END_OF_DOCUMENT_TOKEN_TO_BE_REPLACED

For a few years, United fans dreaded seeing this guy's name on the Liverpool team-sheet.

It is not that easy to find a Getty Sports image of Fernando Torres and Nemanja Vidic on the pitch at the same time. Such was the blistering pace of the Spaniard that the normally unflappable Vidic struggled to legally contain him. He scored three goals against United in 15 games (hardly devastating) but he did damage in other ways.

Between September 2008 and October 2009, Vidic was sent off in three consecutive games against the Reds, with Torres his tormentor in chief. Torres' candle burned brightly yet briefly in the Premier League. He was the league's most lethal striker for three seasons before hamstring injuries saw him lose that explosive spark.

The badge-thumping. The set-pieces. The scything tackles. The scream down the camera lens at Old Trafford. As Liverpool captain and the club's best player for many seasons, Gerrard was the player that got under the skin of most United supporters.

Roy Keane often had his number, but Gerrard still had his moments against United. Scored nine goals in his 35 games against United and was on the winning side 13 times (losing 20 times). Sent off in his final game against United after coming off the bench for the second half and lasting just over a minute.

Put the 'loved to hate' question to one United-supporting friend and, within 30 seconds, got the response - 'Mr Personality, Michael Owen'. 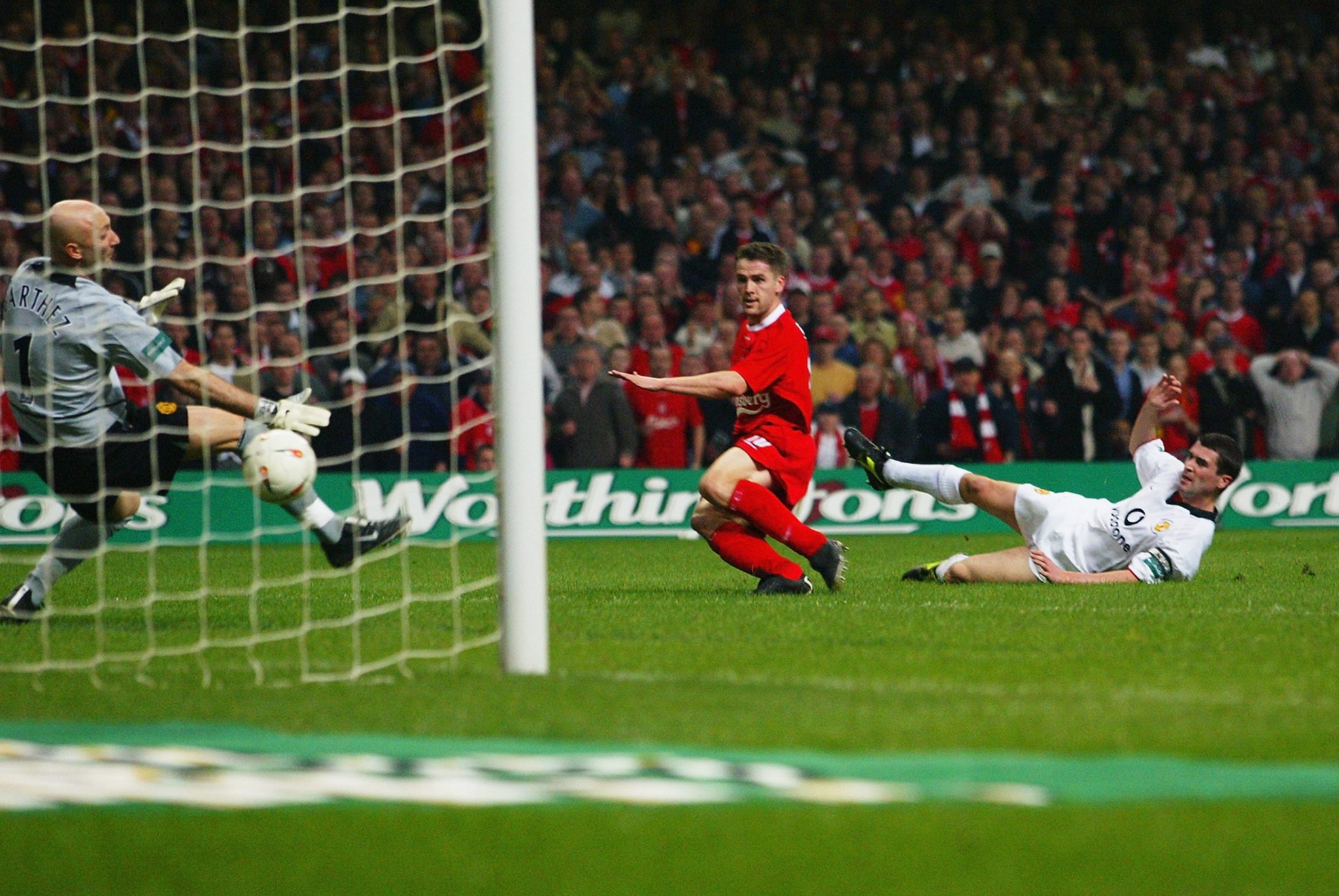 Scored six goals in 18 games against United (winning seven times and losing nine) but rankled United fans for having a pop off Peter Schmeichel. For Reds supporters, Owen's two fouls on Schmeichel meant something different. As Mike Nevin wrote for The Anfield Wrap:

'An impetuous but nasty foul on Peter Schmeichel, not long after scoring a Reds equaliser, saw Owen receive an Old Trafford red card which, if anything, saw his adulation elevated to a new plane'.

Signed for United after a spell in Spain with Real Madrid but not even a late winner in a derby match against Manchester City could ever see fans warm to him.

Not the greatest of players but many a United fan got the shivers when he stepped up to take a set-piece. Scored the matchwinner in three 1-0 victories for the Reds against United [two free-kicks and a penalty].

Was not long on the radar in this storied rivalry but did enough to grate. Scored a headed equaliser in the 3-3 thriller at Anfield and then got ahead of himself by turning down the collar of Eric Cantona, only to pay the price. Cantona returned from the ban he received after kicking Crystal Palace fan Matthew Simmons and Ruddock was waiting for him.

Ruddock turned Cantona's collar down only for the Frenchman to mimic having a large belly - a dig at the defender's girth. Cantona then went on to grab the equaliser in a 2-2 draw. Ruddock later told us:

"I don’t think he had a kick until the last minute and that was when he equalised and did the famous celebration."

Ruddock was not done yet, though. He broke the leg of United striker Andy Cole in a reserve match, in 1996, and later claimed he had did so deliberately. He claimed he only meant to break one of the striker's legs but ended up fracturing both of his ankles.

Although he played six seasons with United, and left them for Inter Milan, Alex Ferguson took it personally when Ince returned to England by signing for Liverpool. As a result, the United faithful proudly picked up that grudge and carried it. 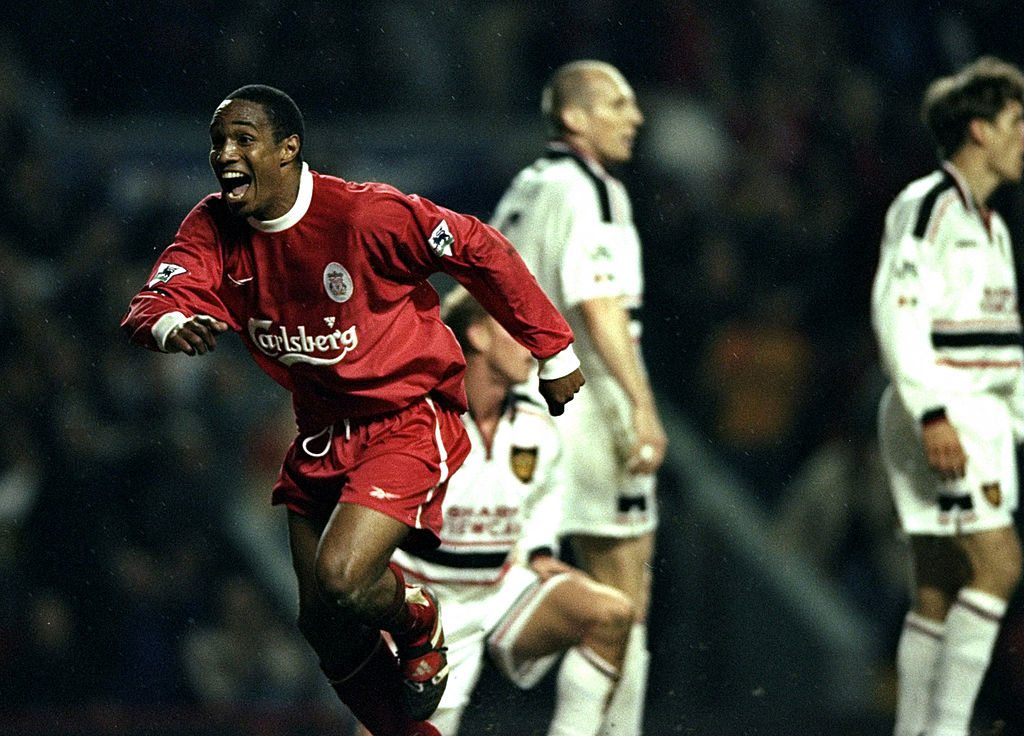 During a documentary on Ferguson, he was captured giving an anti-Ince team-talk, that featured this memorable line:

The words did the trick as Ince, despite scoring in one league encounter at Anfield, could not get one over United (losing twice and drawing twice) as a Liverpool player.

The Toxteth native scored six times in 14 appearances against United and was on the losing side more often than not (eight times). Still, a player who could never be discounted, who epitomised the Liverpool spirit. Scored all of Liverpool's four goals in their three meetings with United in 1995/96 when both squads were strong. 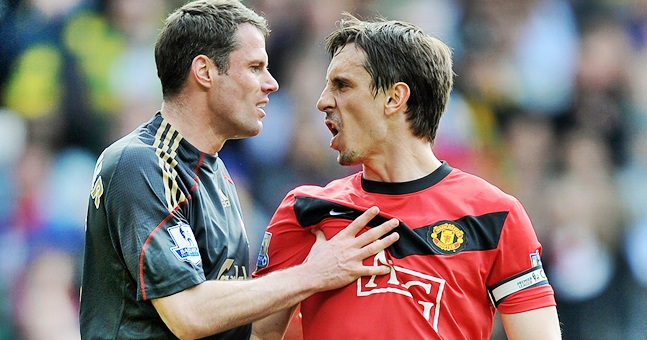 Jamie Carragher argues with Gary Neville after Manchester United were awarded a penalty at Old Trafford in 2010. (Photo by Michael Regan/Getty Images)

Along with Gerrard, he was another stalwart that pushed the buttons of United supporters as he gave it welly for the Reds' cause. His brace of own goals for United, at Anfield, are still fondly remembered up the M62. In total, he scored five goals in his career but four own goals for United. Was also yellow-carded 11 times against United. Had a decent overall record against them when compared to many of his peers (13 wins, four draws, 16 losses).

A lot of United fans reckoned they would go on hating this lad for years to come, but his Sky Sports punditry gig and his 'Greatest Game' podcast have been great platforms to show off his sprightly personality.

As niggly and annoying as the come. The type of player you'd love on your tea - ignoring some of the flaws - but who is a wind-up merchant to every opposition supporter. Scored two goals in seven Liverpool games against United and was only on the winner side twice (losing three times) but still made an impression. Always came in for a feisty reception at Old Trafford. 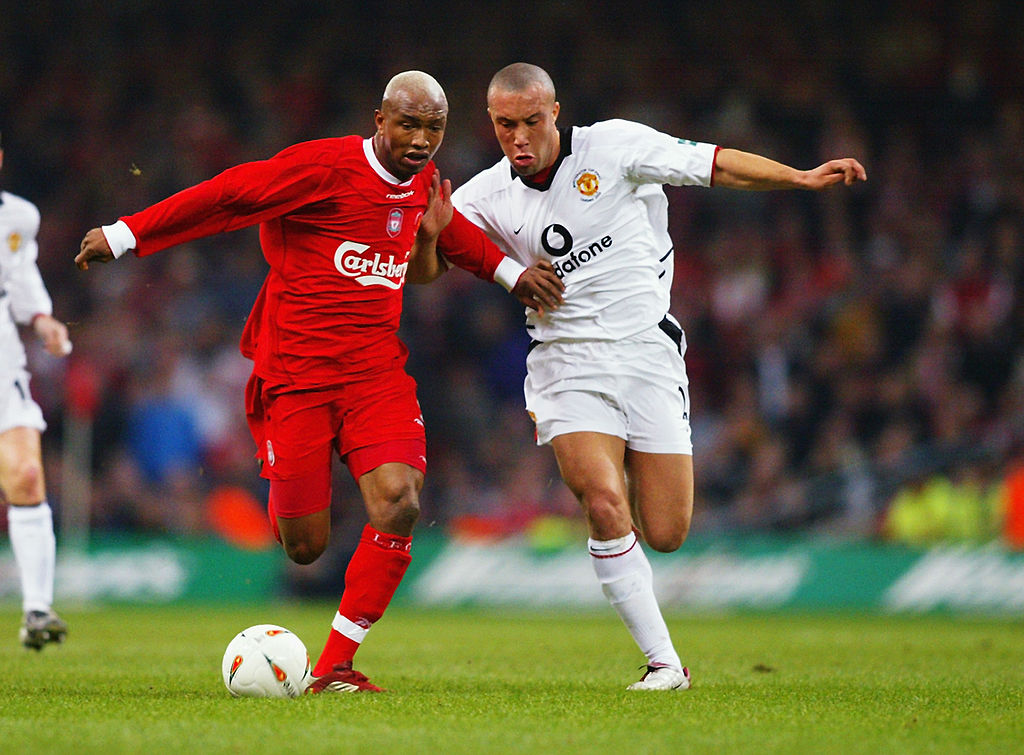 Not much of a threat to United but a fiercely disliked player by more than the Old Trafford faithful. Signed by former United captain Roy Keane, in 2008, when he was Sunderland boss. Keane told the BBC:

"El Hadji has always been the kind of player opposition teams and supporters hate. That's why we're delighted to now have him in our squad."

He edges out Peter Beardsley - scorer of a hat-trick in a 4-0 Liverpool win at Anfield in 1990 - by sheer force of nastiness.

popular
Eric Dier calls Dele Alli on his tantrum in All Or Nothing changing room row
The Tipp minors who beat Dublin's golden generation: the ones that got away
The SportsJOE 12 o'clock quiz | Day 181
"I've always said I'll go back and play. I'll 100% play with Portlaoise again, and I really want to play for Laois"
QUIZ: How well do you know Dodgeball?
Anthony Stokes has Livingston contract terminated after Astro Turf struggles
QUIZ: Can you name the 5 Man United players in 15 seconds?
You may also like
1 week ago
'I only have myself to blame for this huge mistake' - Mason Greenwood
1 week ago
Sergio Reguilón would be a massive upgrade on Luke Shaw for Man United
2 weeks ago
How will Donny van de Beek fit into Manchester United's midfield?
2 weeks ago
Marcus Rashford puts UK government to shame with creation of poverty task force
2 weeks ago
Manchester United set to miss out on 'new Pirlo' after making enquiry too late
1 week ago
'No Room For Racism' to appear on the sleeves of Premier League shirts
Next Page