Former Australia cricketer Andrew Symonds has died aged 46 after being involved in a car crash.

Police in Queensland said Symonds, who had been driving alone, had been injured after his vehicle 'left the road and rolled' on Saturday night. Efforts to revive him were unsuccessful.

A statement from police said: "Emergency services attempted to revive the 46-year-old driver and sole occupant, however, he died of his injuries."

"The forensic crash unit is investigating."

Symonds' family 'in shock' at news. 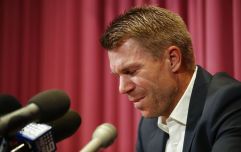 END_OF_DOCUMENT_TOKEN_TO_BE_REPLACED

Symonds was born in Birmingham but moved to Australia, where he was raised, when he was a small child.

He is survived by his wife Laura and their two children, Chloe and Billy.

"We are still in shock - I'm just thinking of the two kids," Laura told News Corp on Sunday morning.

"He was such a big person and there is just so much of him in his kids."

As news of his death spread, a minute of silence was held at sporting events across Australia - including the the NRL match between the Wests Tigers and the North Queensland Cowboys on Sunday.

The all-rounder represented Australia in 26 Tests and 198 one-day internationals between 1998 and 2009, winning the World Cup twice. He also appeared for his country in 14 Twenty20s.

Cricket Australia released a short statement expressing their shock at the news.

We are shocked and saddened by the loss of the loveable Queenslander, who has tragically passed away at the age of 46. pic.twitter.com/ZAn8lllskK

The sad news is another significant loss for Australian cricket, following the recent deaths of legendary leg-spinner Shane Warne, Symonds' former teammate, and wicketkeeper Rod Marsh, who both died earlier this year.

"Australian cricket has lost another of its very best," said Lachlan Henderson, chair of Cricket Australia. "Andrew was a generational talent who was instrumental in Australia's success at World Cups and as part of Queensland's rich cricket history.

"He was a cult figure to many who was treasured by his fans and friends."

"Andrew was a much-loved and admired cricketer in Australia and around the world," added CEO Nick Hockley.

"He was a prodigious talent from an early age in Queensland with his clean ball-striking ability, shrewd spin bowling and brilliant fielding.

"He will be sadly missed by the Australian cricket community and particularly his very close friends at the Queensland Bulls where he was a popular and much-admired team-mate and friend.

"Our thoughts are with his family and friends at this devastatingly sad time."