VIDEO: Steve Collins gets heated while squaring off with Roy Jones Jr. and stiff-arms promoter

Steve Collins does what he wants.

The former WBA and WBO middleweight champion may not have fought in 18 years but it appears as though he still fancies himself in a scrap.

Collins has repeatedly claimed that the only fight that would get him back in the ring would be a bout with multi-weight great Roy Jones Jr. 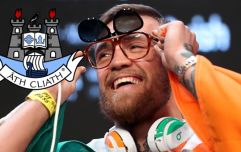 END_OF_DOCUMENT_TOKEN_TO_BE_REPLACED

While that bout never came to fruition, Collins didn't half try to stir up some public interest when he got in Jones Jr's face at the weigh-ins for Saturday night's London showdown between Frank Buglioni and Fedor Chudinov.

It was promoter Vlad Hrunov, rather than Jones Jr, who came off worst in the face-off as the Russian got a faceful of Collins' palm as the Dubliner repeatedly tried to shove him away.

Everyone other than Collins found the whole ordeal hilarious but it just goes to show that there's still some fight left in The Celtic Warrior.