And you thought all this talk of UFC fighters taking on boxing greats in the ring was ludicrous...

Michael B. Jordan recently claimed that he would be confident holding his own against his boxing hero, Roy Jones Jr., at this stage of the legend's career.

Jordan has put himself through strenuous boxing training to put himself in the shape of his life for the Creed sequel and while his physical condition speaks for itself, the actor feels that his boxing technique has been honed to the point where he would be able to give Jones a run for his money in the ring.

"In his prime, no, he'd probably knock my ass out but right now, I could probably do my thing," Jordan told TMZ. 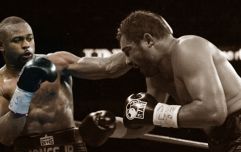 END_OF_DOCUMENT_TOKEN_TO_BE_REPLACED

He may be 49 but Jones fought as recently as February, claiming a unanimous decision victory against Scott Sigmon for the WBU cruiserweight title.

Jones has never been one to shy away from a fight and it sure sounds like he's accepted Jordan's challenge as he has told the actor who plays Adonis Creed to get in touch with his team.

"If Michael B. wants this real, contact Roy Jones Jr. and we'll make it happen," he told TMZ.

"I know he can't beat me still. I know he's probably in better condition because he's younger ... but I'm an old school vet."

The former Olympic silver medallist went on to claim that he would need only four or five weeks to prepare for a fight against Jordan, who is 18 years Jones' junior.


popular
Galway fans' frosty reception for Davy Fitz doesn't make any sense
The most Stone Age tackle you've ever seen gets South African lock straight red card
'Brian was a genius... he would've killed you to even win a game of touch'
When Liam Brady lit into Brian Clough for his dismissive Mick McCarthy comments
Ole Solskjaer hits back at Rio Ferdinand's Ronaldo comments
Former Antrim captain Anto Finnegan has passed away
Ryan Manning hacked to the ground by Henri Lansbury in ruthless assault
You may also like
5 years ago
WATCH: Roy Jones Jr. fought a fan last night and it ended exactly how you'd have expected
5 years ago
Do you think you could knock out Roy Jones Jr? If so, there could be $100,000 in it for you
5 years ago
Watch: 46 year old Roy Jones Jr. should probably call it quits after this vicious KO
5 years ago
VIDEO: Steve Collins gets heated while squaring off with Roy Jones Jr. and stiff-arms promoter
6 years ago
Video: 46-year-old Roy Jones Jr still has that thunderous knockout power
6 years ago
VIDEO: 46-year-old Roy Jones Jr records second knockout victory in just three weeks
Next Page