The Game of Thrones star has lost around 36 kilograms since deadlifting 501 kilograms.

Hafthor Bjornsson - The Mountain from Game of Thrones - has explained how his diet has changed ahead of his hotly-anticipated fight against Eddie Hall.

The Mountain will fight The Beast in Las Vegas in September 2021 and both men are getting themselves into shape.

The Icelandic strongman used to put away as much as 10,000 calories when competing for World's Strongest Man, but he's since altered his nutrition plan for the boxing ring.

Bjornsson won World's Strongest Man in 2018, but stepping into the ring is going to place a different kind of stress on his body. It has called for somewhat of a dietary overhaul.

Speaking to Men's Health, Bjornsson said the main change he has made to his diet is fairly simple to understand: cutting back on carbs.

Bjornsson said: 'I used to have six eggs [for breakfast] with rice and spinach but, this morning, I only had five eggs and just spinach. I skipped the rice.

"I'm trying to lose weight for the fight. It's working well: I've already lost 16kg. For the deadlift, I weighed 206kg. Today, I weigh 190kg. It feels great – I have much more energy." 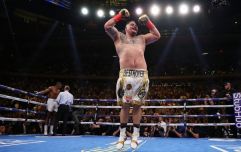 END_OF_DOCUMENT_TOKEN_TO_BE_REPLACED

Weight loss is generally a matter of calories in versus calories out. Do you necessarily need to cut your carbs? No, but this is the method which has helped Bjornsson get into a calorie deficit.

Since making those comments, Bjornsson has gone on to lose a further 20 kilograms. He now looks super lean, while still weighing a whopping 170 kilograms.

"Easy one - I'd probably just squeeze his eyes out."

Ahead of their fight, The Mountain @ThorBjornsson_ responds to @eddiehallWSM, who said his 501kg world record deadlift wasn't legit. pic.twitter.com/K25qMdRCKc

Speaking to JOE at the time, Hafthor Bjornsson dismissed claims that his deadlift wasn't legit, and said Hall's body wasn't healthy enough to cope with his 500 kilogram pull.

He said: "This lift is probably more legit than any other lift that has ever been done in strongman before. If it's so easy, why don't you just go ahead and pull 502 kilograms?"

Bjornsson had only just begun training for the fight when we spoke in June.

"I can promise that I will not gas out first round like many people are predicting."


popular
"I was like, ‘My ear is hanging off my head. Can you not see that?!'"
"Hang on lads, there is more to life outside of Dublin" - Connellan is a rebel with a cause
The SportsJOE 12 o'clock quiz | Day 307
Japanese rugby players living off the classic Irish school lunch for pre-match-meal
QUIZ: Name all 50 of these 2000s Champions League players – #4
QUIZ: How well do you know Manchester United players of the 2010s?
QUIZ: Identify the missing sponsors from these football jerseys
You may also like
1 month ago
Conor McGregor's new work-out regime and daily diet ahead of UFC return
1 month ago
World's Strongest Man's weight loss transformation is ridiculously impressive
6 months ago
The daily diet of Manchester United midfielder Jesse Lingard
1 year ago
Vegan diet that's taking English star Ellis Genge to new levels
1 year ago
WATCH: Leinster Rugby nutritionist Daniel Davey's top tips and recipes
1 year ago
England centre Henry Slade on the changes he made to his diet and training
Next Page