You know you've worked yourself into an embarrassing hissy fit when you demand that people stop laughing at you.

It's the type of rage that you usually only see from a child who's had one too many Capri Suns, but at a boxing press conference in Germany, we saw it happen to a grown adult.

Stuttgart was the location of the presser as Chris Eubank Jr and Avni Yildirim came together to promote their super middleweight quarter-final of the inaugural eight-man World Boxing Super Series tournament. It was all going relatively swimmingly until Yildirim's manager Ahmet Oner lost the plot out of seemingly nowhere.

Something ticked the former pugilist off enough for him to unload an expletive-filled tirade a member of Eubank's team before standing up and trying to confront them.

"I'll knock you out. You're a fucking piece of shit, a son of a bitch, you fight me, you cunt!"

The only way to remove all doubt https://t.co/eB5zE1s92Z 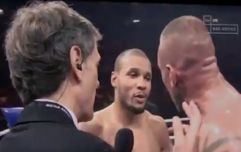 END_OF_DOCUMENT_TOKEN_TO_BE_REPLACED

That did the opposite of calm him down though. As he was being brought back again, he removed his jacket and his cufflinks before yelling, 'You son of a bitch! I fuck your wife in your bed!'

Check out the bonkers moment in the video embedded below.