Dereck Chisora was unlucky to suffer a split decision loss to Dillian Whyte last night in one of the best heavyweight bouts in recent memories.

Both fighters received plenty of praise for their 12-round battle, with many fight fans calling for a rematch between the pair.

But one moment stood out for some viewers - and it wasn't really for sporting reasons.

With Chisora against the ropes and Whyte waiting to do his thing, the Finchley fighter decided to have a bit of fun.

At least that's how a lot of people saw it.

Chisora deserved to win just for pretending to hump whyte 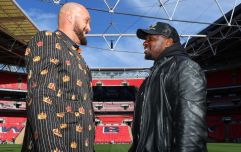 Dillian Whyte promises Tyson Fury rematch if he defeats him, despite no contract clause

END_OF_DOCUMENT_TOKEN_TO_BE_REPLACED

Anthony Joshua's knockout victory over Eric Molina might have been the main event, but Chisora and Whyte was the bout that boxing fans were talking about throughout the night.

Both fighters could have claimed victory in a slugfest for the ages, and some even thought a draw would have been a fair outcome.

It remains to be seen whether the pair are granted the rematch that a lot of fans are after - and, of course, there's no guarantee that Whyte will feel the need to take on the 33-year-old again after being taken the distance in Manchester.