Ireland's greatest ever sportswoman continues to back up the hype.

Katie Taylor will leave Azerbaijan with gold wrapped around her neck after taking all four rounds against France's Estelle Mossely.

Taylor looked to have gained motivation from a semi-final fright as she took the lightweight final on points against a gritty, if outmatched, opponent. 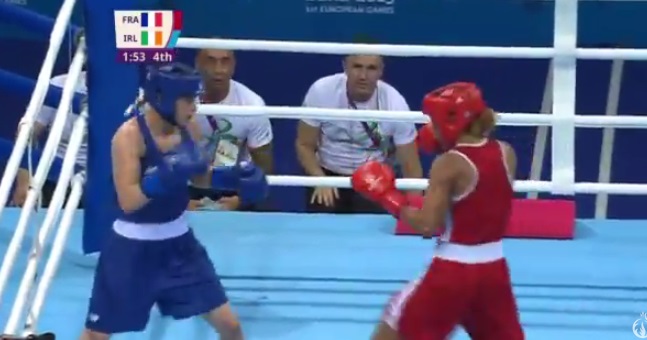 The fight wasn't the most technical you're going to see but Taylor's experience paid dividends as she knew when to pour it on and when to lay back as every round followed a similar path.

The medal is Taylor's 18th total championship gold medal so we're pretty confident in saying that she's not too shabby at the ol' boxing.

popular
The SportsJOE 12 o'clock quiz | Day 142
SportsJOE 2000s Football Quiz | Round 12
Rory McIlroy defends Dustin Johnson after Brooks Koepka comments
Robin McBryde on training session that sent message to Leinster's international stars
Collin Morikawa makes huge world rankings leap as Lowry drops back
Only a Champions League fanatic would get full marks in this quiz
Brooks Koepka puts PGA Championship leaders on notice with final round comments
You may also like
9 months ago
Katie Taylor set for Amanda Serrano super-fight in March 2020
9 months ago
'I never thought, three years ago, I'd be headlining somewhere like the Manchester Arena'
1 year ago
Katie Taylor's next three fights include Delfine Persoon rematch
1 year ago
Carl Frampton on how much a boxer's fight purse is actually worth
1 year ago
"You know what the problem is for female fighters? They can’t make money" - Lou DiBella
1 year ago
'Katie's an Olympic gold medallist who unified the belts but is not getting paid like a man'
Next Page