"I will probably have a chocolate cake with a cup of tea. That's how I celebrate!

We hope they have a tasty chocolate cake and some decent tea [Lyons or Barrys!] over at Madison Square Garden, for Katie Taylor.

The undefeated, undisputed women's lightweight champion will put it all on the line, against Amanda Serrano, this weekend in what promises to be a record-breaking fight.

END_OF_DOCUMENT_TOKEN_TO_BE_REPLACED

For more than three years, Taylor has targeted an über-fight against Serrano but wrangles over pay, broadcast rights, location, purse splits, and more, along with Covid-19's impact on sport, has put it agonisingly out of reach.

Now that the world is back whirring again, Taylor vs. Serrano is materialising and, when the tallies are counted, it will be confirmed as the biggest women's boxing fight ever. In a way, both fierce competitors have already won. But, of course, it is enough for neither.

Ahead of the fight, we were lucky enough to interview Taylor and, during a wide-ranging chat - that covered her football career, sparring partners, Conor McGregor, Roy Keane and the fight itself - one question and answer stood out. 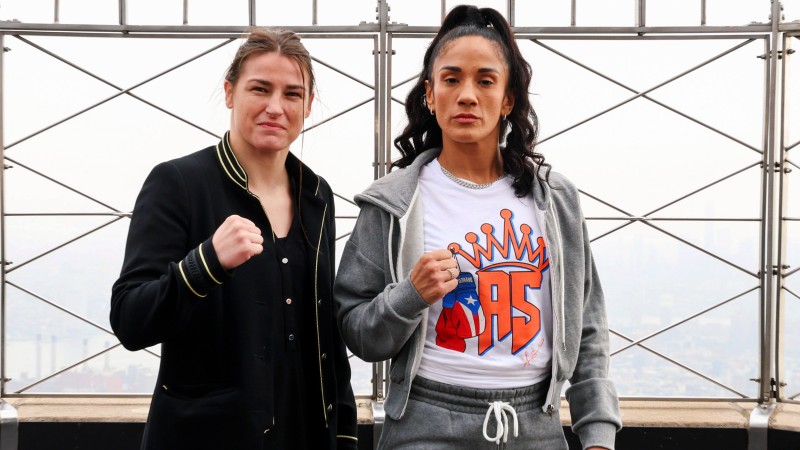 Katie Taylor, left, and Amanda Serrano at the Empire State Building, ahead of their WBA, WBC, IBF, WBO and The Ring lightweight title bout, at Madison Square Garden in New York. (Photo by Ed Mulholland/ Matchroom Boxing via Sportsfile)

Q: Do you feel responsible for women's boxing?

END_OF_DOCUMENT_TOKEN_TO_BE_REPLACED

KATIE TAYLOR: "I feel I have a responsibility to myself more than anything else, I want to be involved in the biggest fights, I don't think I'd back down from any single challenge. I think it's the job of every single professional fighter to want the big fights and want the big challenges.

"I'm looking back at some of the best fighters that we've ever seen, the likes of Sugar Ray Leonard, that era where they all fought the best - Tommy Hearns, Roberto Duran, Marvin Hagler. These type of guys, they've all had losses on their record, but they're remembered as being absolute legends in the sport because they were willing to fight the best. And I just want to have that kind of mindset.

END_OF_DOCUMENT_TOKEN_TO_BE_REPLACED

To us, that answer is what sets Katie Taylor apart from so many other current, and past, fighters. She wants to take on the very best out there, to see if she has it, and to see if she can dish it out to the supreme boxing beings.

To Taylor, she wants to look back on her career and have no regrets. Sure, losing at some point in her professional journey would sting, but not as much as backing down from a challenge. 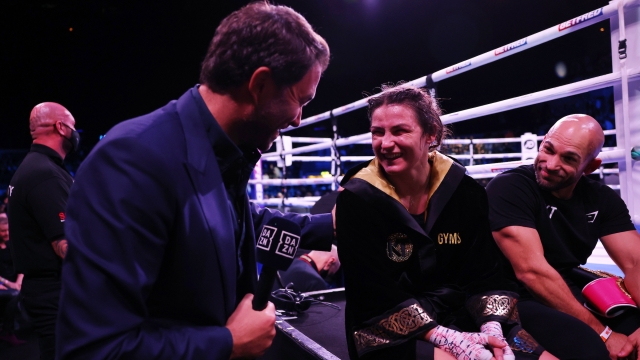 Leading into the fight, Katie Taylor spoke glowingly of Eddie Hearn, one of her main promoters, and all he had done for her, personally, and her career.

"I'm definitely very, very grateful for all that Eddie has done, not just for me but for women's boxing in general," she said.

"I remember the first time I actually had a meeting with Eddie, about six years ago, I came into his office and I said I was interested in turning pro. We didn't really know how this journey was going to go, both of us had no clue whether it was going to be a success or not, how people's perception were of the sport, we were both going into the unknown really.

"Here we are a few short years later and we're actually selling Madison Square Garden, being involved in the biggest fight in female boxing history. The excitement, the buzz around this fight is incredible. And we're seeing so many female fighters over the last few years getting huge opportunities because of Eddie Hearn, so yeah I'm very, very grateful to him and it's been a very, very exciting few years for both of us."


popular
Man United could be blocked from playing in the Champions League next season
Eight players to watch in tonight's Sigerson Cup semi-finals
Ireland team vs. France: Form players rewarded and a welcome return
French media's opinion of this Ireland team becomes clear as vital clash nears
Clive Woodward happy to 'eat humble pie' after bold comments about Ireland
"I should have been more mature" - O'Sullivan's injury trail a cautionary tale for Sigerson casualties
Man City expect Pep Guardiola to leave
You may also like
1 week ago
Katie Taylor's rematch with Amanda Serrano 'highly unlikely' to take place at Croke Park
2 weeks ago
Anthony Joshua agrees to face American heavyweight
2 weeks ago
Chris Eubank admits that he regrets "ugly build-up" to fight with Liam Smith
2 weeks ago
Liam Smith throws uppercut from the gods to stop Chris Eubank in fourth round
2 weeks ago
Floyd Mayweather announces his first ever UK fight at the O2 Arena
2 weeks ago
Liam Smith asks Chris Eubank if he is gay in the most bizarre press conference you will ever see
Next Page