Jason Quigley answers my call just days out from headlining a DAZN card against Tureano Johnson.

The Donegal native is preparing to headline his third card for the subscription video streaming service in the early hours of Friday morning but the road back to Fantasy Springs Casino, Indio, is a familiar path, even if it has its difficulties.

Long haul flights, early morning starts, jet lag, weight cuts, it's a difficult week but Quigley keeps himself in very good shape and this is another trip back to a venue where he's won two of his last four fights.

The 28-year-old is now at a stage of his career where he's headlining cards and beginning to put himself into the frame for world title contention but he still clearly remembers where it all started for him in Las Vegas five years ago.

5 years ago today I made my professional debut in the MGM Grand Las Vegas on the Canelo v Lara undercard. Next week I'm headlining my own show for the third time 👊🏼
.
.#Boxing pic.twitter.com/tCIPx5qSEP

"My memories of that night was that it was the MGM Grand in Las Vegas. The reason I started boxing was because of Marco Antonio Barrera. I used to stay up and watch his fights and see him walking through the tunnel at the MGM.

"I remember I was backstage and I saw the big MGM lion up on the wall. I remember walking out of my changing room just before the ring entrance and thinking 'holy shit' I'm really here.

"Then I walked out into the crowd and there were like 20 or 30 people there. It was the very first fight of the night.

"These are the great experiences and the things that drive you on to walking out in front of a packed arena someday. Now I'm headlining my third show here in California so things are going in the right direction."

At 16-0 with 12 knockouts, Quigley's career has generally scaled on an upwards trajectory but there have been dips along the way.

He moved to America to fight on big cards like the co-main event to Bernard Hopkins' farewell fight against Joe Smith Jr. in 2016 but he said that the most fun he had over in the States was often in the gym, and that when he wasn't training in Los Angeles' famed The Rock gym, he was often lonely.

He missed home. He missed friends. He missed family. He loved the boxing but started to realise that the sport was as much about mental preparation as it had to do with physical training or sparring.

"I think first and foremost it's all about mentally preparing and mentally being ready," the middleweight added.

"There's a lot of fighters out there that don't look into the mental side of boxing, they look at I need to change this, that and whatever. At the end of the day you need to be 100% happy and focused in your head and in your mind.

"For a lot of people things mightn't be going right in their career. They mightn't be happy with it. They try changing coaches. They try doing all these different things.

"For me it was mainly my location. I was a long way away from my home in LA and I wasn't enjoying it as much because 80% of my life was on my own. It was a bit boring.

"The only real fun I was having was in the gym but it was dampening myself outside the gym. I was just on my own. Even with the time difference you couldn't really call people.

"For me it was about getting myself right mentally and enjoying what I was doing again. I'm a lot closer to home and it's a lot more familiar to me and I'm able to get back to doing what I love doing best; and that's boxing and enjoying it while I'm doing it." 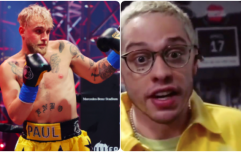 END_OF_DOCUMENT_TOKEN_TO_BE_REPLACED

Quigley and Ireland football captain Seamus Coleman were both in Clones last month for their county's triumph in the Ulster final against Cavan  and the former Sean Mac Cumhaill club man has said that he's grown quite close with captain Michael Murphy over the last few years.

"I'd be quite good friends with Michael," he adds.

"We'd be in touch a lot and he's just an absolute gentleman away from football. He's a class act and a great ambassador for Donegal.

"I'd be texting him the odd time before a game and he'd text me before a fight. I know plenty of the lads in there - the McHugh brothers, Patrick McBrearty, young Oisín Gallen from Ballybofey - who got 1-1 in that game against Meath.

"He's a young kid coming on and he's a credit to his club and his family because he's a very nice lad and he's starting to get the rewards now."

Quigley is ranked #5 by the WBC and admits that he's just a phone call away from a world title shot.

He's in the right ball park but he notes that it's important for him to keep building and testing himself against elite level fighters such as Tureano Johnson, who he will fight sometime after 4am on Friday morning.

"Anybody that follows boxing knows that any fighter could be one or two fights away from a world title shot. If you get in there against a world class operator and you beat him, and then you go win your next fight again, you could be called up for a world title shot.

"It's all about getting inside those top 10 rankings and then once you're there world titles are just a phone call away.

Another important week ahead for @Jay_Quigley as he defends his NABF middleweight title against Tureano Johnson LIVE on eir sport 1! #QuigleyJohnson pic.twitter.com/c91pnXAj9t

"We're both coming into this fight looking for bigger fights after it as well. This is why I'm very excited for this fight. Johnson is a top level operator and he's been in there in world title eliminators against Serhiy Derevianchenko, who fought against Danny Jacobs for a world title.

"He's been to the Olympics as an amateur. On paper he's boxed at a higher level as pro, he's more experience as a pro, but I'm looking forward to this fight and I want to share it with him and test myself."


popular
Bill Shankly’s grandson asks for statue to be removed from Anfield
'Make him hurt, make him yours' - How the Springboks ruled the world
We knew Sean O'Brien wouldn't let us down with his Lions XV
'War-scene' in Tyrone dressing room before 2005 final sums up an iconic team
Springboks legend Tendai Mtawawira tells us what he really thinks of Ellis Genge
Keith Earls backed for Lions XV by one of the best in the game
The SportsJOE 12 o'clock quiz | Day 335
You may also like
1 year ago
'Michael Murphy would be the No.1 transfer for every inter-county side'
1 year ago
Michael Murphy scores with last kick of the game to seal draw for Donegal
1 year ago
Donegal enjoying the best of Michael Murphy because of everyone else
2 years ago
Michael Murphy boldly speaks about the only chance teams have of beating Dublin
2 years ago
There was a strong reaction to Michael Murphy's debut on The Sunday Game
2 years ago
Michael Murphy to join The Sunday Game panel for semi finals analysis
Next Page