GGG was not having it.

Gennady Golovkin suffered his first ever loss, in Las Vegas, when he was edged out on points by Saul 'Canelo' Alvarez.

The Mexican shaded Golovkin on two of the three judges' scorecards to claim the world middleweight title and, we all know it, set up a trilogy fight.

END_OF_DOCUMENT_TOKEN_TO_BE_REPLACED

Golovkin had been denied a win in the pair's first bout, feeling he deserved a win but having to live with a draw. The rematch had originally been scheduled for May 5 but a failed drug test, which Canelo blamed on tainted meat he had consumed, delayed it four months.

Alvarez was the more aggressive of the fighters and waded forward in the early rounds. Golovkin's jab began to find its' range and he finished the stronger of the two men, but each round was so close.

Both raised their arms in victory at the final bell but it was Alvarez that shaded the previously unbeaten Ukranian on the final scorecards - 115-13, 114-114 and 115-113 - for a majority decision win. 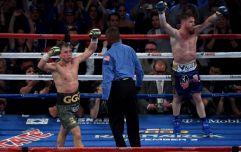 END_OF_DOCUMENT_TOKEN_TO_BE_REPLACED

Given the razor-thin nature of the rounds, the decision was met by a mix of cheers and boos when it was announced.

Canelo, surrounded by his overjoyed entourage, had the middleweight belts strapped around his waist and draped over his shoulder.

As for Golovkin, he was clearly seething. He had always claimed to have been the true victor of the first fight and had now missed out on career wins 39 and 40 due to contentious scorecards. 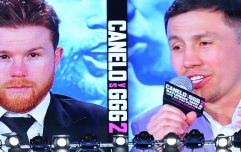 Canelo Alvarez rematch with Gennady Golovkin confirmed, and his split of the purse is much bigger

END_OF_DOCUMENT_TOKEN_TO_BE_REPLACED

There were kind words exchanged by both fighters in the ring but Golovkin's true disgust was apparent as he stormed off without giving any post-bout interviews:

He was approached on a couple of occasions to discuss the fight but was clearly not having it.

Alvarez looks set to face Canada's David Lemieux, who brutally knocked out Gary 'Spike' O'Sullivan, next but there is still business unfinished with GGG.