Lou DiBella has been in the fight game for the past three decades and has, over the years, worked with big names such as Bernard Hopkins, Paulie Malignaggi and Andre Berto.

If there a big fight happening in New York, DiBella Entertainment usually has a piece of the action.

The Brooklyn promoter sat down with Carl Frampton and Chris Lloyd, on TKO, and offered a fascinating, bullshit-free insight to why some of the fights we all want to see never seem to get booked. 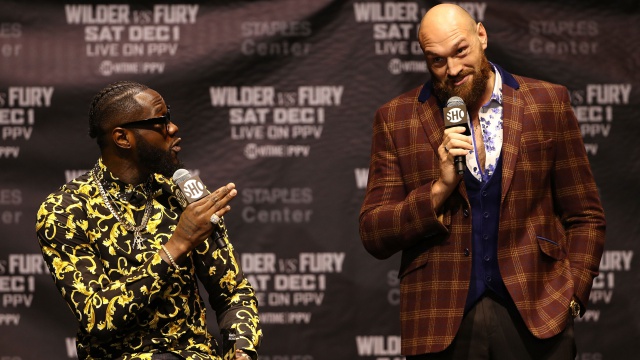 "Right now, ESPN has a deal with Tyson Fury and, basically, Fury is the poster-child for heavyweight boxing - for Bob Arum, ESPN, Frank Warren and BT Sport. He is the centre of that universe.

"A.J [Anthony Joshua] is the centre of the Matchroom and DAZN universe, and Deontay Wilder is attached to PBC. Now PBC is a brand but it basically does business with FOX Television, FS1 and Showtime. It's the PBC brand.

"You have three distinct and separate roads, and it is not easy to navigate them, because ESPN is throwing is money and promotional power behind Fury. They don't want to see Fury's biggest fight going to a competing streaming service. No!

"And [Al] Haymon and PBC don't want to see Wilder fighting on another platform."

DiBella says it was easier, in the 90s and 00s, to arrange these big fights as there was only one basic cable service and a premium cable service [HBO and Showtime] to thrash out deals for the likes of Lennox Lewis, Mike Tyson and Vitali Klitschko.

"I'm not saying it can't be done and it will be done," said Di Bella. "I don't know if all three of those guys [Joshua, Fury and Wilder] will be around by the time it is done, but it will happen.

"Eventually the public will demand it and if all three guys keep winning, there will be so much money to be made that one of the fights... the desire will be there to make it."

Joshua stumbled against Andy Ruiz, to damage his chances of that big-money fight, but another win or two and he will be right back in demand.


popular
"It’s hard not to respect Johnny, even if you don’t like him!" - Dan Biggar
Quiz: Which footballer has played more times for Ireland?
Martin McHugh: Them lads were stronger than the modern day player who's lifting weights all the time and doing no manual work
"I was in the Blackrock end goal looking up to the heavens saying, "Get us through it" - Kerins following his late father's footsteps
Dessie Farrell set to cut large chunk of Dublin players as panel is reduced for league campaign
Sky Sports presenter explains why Roy Keane and Graeme Souness are so critical of players
"I missed two senior championship games in the Gaelic and it was eating me up inside" - Bradley-Walsh getting a lot done
You may also like
2 weeks ago
The most disliked boxers on the internet revealed by new survey
3 weeks ago
Jake Paul taunts Floyd Mayweather with New Year's resolutions list
1 month ago
12 sports documentaries you must watch this Christmas
1 month ago
Amanda Serrano's last opponent unrecognisable after 236-punch barrage
1 month ago
Jake Paul spot-on with women's boxing comments as he plots Taylor vs. Serrano
1 month ago
Jake Paul calls out Jorge Masvidal and Nate Diaz after knockout win over Tyron Woodley
Next Page