The gloves are off. Literally.

We're not going to see another Carl Froch - Mikkel Kessler bout ever again. The final half of them has retired.

Froch has stepped away from the ring for the final time with the decision of the 38-year-old to retire from the sport.

The English man had won four super middleweight titles over a glittering 35-fight career that saw him loss just twice to Kessler and Andre Ward.

I'm officially retired from Boxing. So much to say & so many people to thank. But for now, I just want to say THANK YOU to my amazing fans.

He did get revenge over Kessler in an epic battle in 2013 but he is bowing out with a packed Wembley stadium still ringing in his ears when he beat George Groves for a second time with a frightening right hand in the eighth round in May last year. 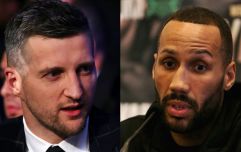 END_OF_DOCUMENT_TOKEN_TO_BE_REPLACED

But there will be no more clashes Nottingham native who insists that he will not go back on his decision.

"I always said if I retire, I won't come back," he told Sky Sports News.

"It's annoying for me as a boxing fan to see people retire and then change his mind.

"I think, when the desire is gone, you've got to be honest with yourself and say, 'that's it'."

Sure, at least it's another excuse to relive that second war with Kessler.