At one point, the rematch between Tyson Fury and Deontay Wilder looked nailed on.

Both fighters initially seemed keen to run it back and truly determine the better fighter after December's controversial split draw in Los Angeles.

Negotiations were well underway for Wilder vs. Fury II to take place but talks seem to have stalled ever since 'The Gypsy King' agreed a deal with ESPN which made them the exclusive broadcaster of his fights in the United States, bringing about a potential conflict with Wilder, who is contracted to Showtime.

With Anthony Joshua set to make his US debut against unbeaten New Yorker, Jarrell 'Big Baby' Miller, Fury vs Wilder II seemed to be a no-brainer but now that Fury is getting radio silence from 'The Bronze Bomber', it looks like they will both have to go in a different direction for their next trip through the ropes.

Cruiserweight legend Johnny Nelson revealed that the texts had dried up from Wilder's end, leading Nelson to believe that the rematch will not happen next, if at all.

"Tyson told me that before he fought Deontay Wilder, they would text each other," Nelson told IFL TV.

"Tyson would say things like 'you alright you big bum?' and all this sort of stuff. And they'd text each other back.

"But since the fight, Tyson has texted and asked him how he is doing and when they are going to get the rematch going and he hasn't got a reply yet. 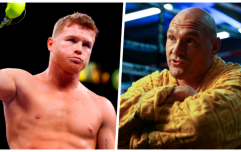 END_OF_DOCUMENT_TOKEN_TO_BE_REPLACED

Nelson continued: "I don't think the fight will happen because I think, surprisingly for Wilder, the things he's saying about 'AJ', it's coming across (like he's pushing for that fight).

"I always thought he'd be the kind of guy who would want to right a wrong and fix that blip, that draw with Tyson Fury.

"This is the quietest I've heard him and he doesn't come across to me as that type of guy but right now, he does.

"I hope the rematch does happen but I've got a funny feeling it won't."


popular
Six minutes was all Alan Connolly needed to score two goals and set up another
Sensational scenes in Belfast as Antrim edge out Clare in a thriller
'Jesus Christ! How am I going to put up with this lad for nine weeks?!'
"Of the 37, Bundee Aki would be my 37th most expected selection and my worst rated"
Gatland comments give insight as to why CJ Stander missed Lions call
Peter Queally vaults into Bellator title picture with stunning win over Pitbull
South African media shocked by Lions omissions of Sexton and Ryan
You may also like
10 months ago
Varadkar urges media and sporting bodies to have "nothing to do with" Fury/Joshua fight
1 year ago
Tyson Fury confirms date for Deontay Wilder rematch
1 year ago
Tyson Fury belts out Aerosmith and 'American Pie' after dominant TKO victory
1 year ago
"Anthony Joshua changed his stars through life" - Tyson Fury's classy response
1 year ago
Tyson Fury reveals when Deontay Wilder rematch is likely to happen
1 year ago
Tyson Fury names condition for fighting Dillian Whyte
Next Page