Conor McGregor swore to me he's beating Floyd Mayweather Jr. and I bloody believe him

Let's be honest, 99.36% of the world believes Conor McGregor is going to lose to Floyd Mayweather in Las Vegas on August 26.

'The Notorious' has opted to make his professional boxing debut against the undefeated, serene Floyd Mayweather Jr. [49-0] in front of a crowd that will be paying in excess of $70m to be in attendance at the T-Mobile Arena. Angelina Jolie will be there. So will Denzel Washington.

McGregor has been boxing a little this year, on his hiatus from the UFC, but he only got into intense sparring and preparations about 10 weeks ago. Mayweather has never been knocked down and he has seen off the likes of Oscar de la Hoya, Manny Pacquaio and Canelo Alvarez.

We'll stop there as one can go on and on about the differences in records and advantages one man holds over another.

As fight night draws closer, McGregor is switching through the gears. Eyes glistening. Veins popping. Gum being chewed flavourless in seconds. Mayweather is getting in some late-night Burger King and hanging out at the roller disco. Two different roads but both men will be as ready as they ever will be when the bell rings.

"One of us [McGregor or Mayweather's team] is living in a huge delusion," John Kavanagh conceded on Monday. "That would appear to be a fact." 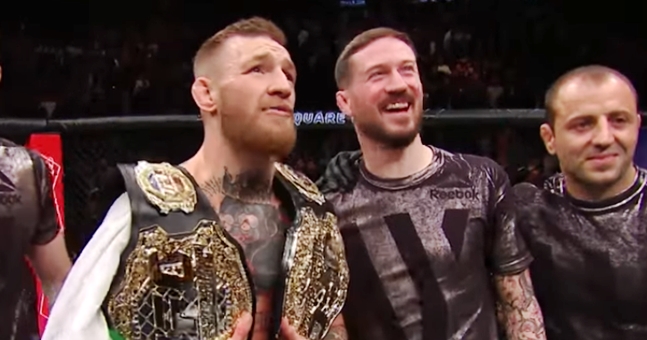 As much as everyone - from experts to pundits, boxers and MMA scribes to laymen and shock jocks - have told me that this one is a foregone conclusion, I can't bring myself to take it as read. Not entirely. I've seen and experienced enough to push me into that 0.64% camp with McGregor's team, his family, Dana White, Skip Bayless, Idris Elba, Rory McIlroy and... that's about it.

"In his mind, he genuinely believes he can do anything. That self-belief is unstoppable for Conor. And he definitely believes he has more than a chance for this fight - he knows he is winning."

END_OF_DOCUMENT_TOKEN_TO_BE_REPLACED

The last two times McGregor was under such scrutiny and facing such steady derision were before his featherweight title fight against Jose Aldo and, 25 kilos heavier, his rematch with Nate Diaz. He finished one scrap in 13 seconds and picked Diaz apart in the other.

McGregor has fought six times since SportsJOE came into existence. Each time he has stared down the lens and told us he is winning. Only Diaz has managed to prove him wrong and that loss was avenged.

In the early hours of Sunday morning, I am backing McGregor to get the job done. I'm not brimming with confidence but I know what he is capable of.

I am aware that Mayweather is a master technician in the ring. I've watched enough of his fights to fear that this could go south for McGregor but I'm a believer in the Hail Mary. That PING - when McGregor's left connects - described by Daly that leaves you seeing stars. That moment of unexplainable, intangible magic.

I choose to believe.


popular
Roy Keane on the experience of being managed by Jack Charlton at USA 94
The SportsJOE 12 o'clock quiz | Jack Charlton special (Day 112)
"Never back against the Irish" - How the BBC covered our USA 94 win over Italy
WATCH: Amazing scenes at Aviva Stadium as Jack Charlton is given standing ovation
When the President interrupted a Euro 88 pint between Charlton and Dunphy
'ROG was the kingpin... he just wanted to win, win, win' - Barry Murphy
Packie Bonner on being Celtic's teenage goalkeeper and angering Jack Charlton at Euro 88
You may also like
1 month ago
Dana White faces more retirement questions after Garbrandt and Nunes victories
1 month ago
Justin Gaethje tells Conor McGregor to wait his turn
1 month ago
McGregor the fighter just couldn't help himself
2 months ago
"I'll go to Ireland; do what I gotta do" - Gaethje has plans for McGregor after title fight
2 months ago
"Donald showed up; Cowboy wasn't there. The wrong guy showed up"
2 months ago
"There's never been a rivalry as poisonous. It's an evil kind of buzz"
Next Page