On June 2011, Conor McGregor defeated Artur Sowinski in the Celtic Gladiator main event at the Heritage Hotel in Laois. Generous estimations give the crowd at just over 700.

At the T-Mobile Arena in Las Vegas, on August 26, McGregor will make his professional boxing debut against undefeated multiple world champion superstar Floyd Mayweather Jr. The gate receipts for the fight are expected to be in excess of $75m and pay-per-view numbers are on track to surpass 5 million.

Ever since McGregor went truly global, following his featherweight title successes in 2015, we have seen his trash-talking, fight-hyping and witnessed a supremely talented MMA fighter climb to the top of his game.

Still, the Dubliner's  achievement of getting Mayweather Jr. out of retirement and into a boxing ring, with massive money guaranteed for both winner and loser, is his greatest stroke yet.

On SportsJOE Live, that achievement was recognised by former UFC star Aisling Daly and Irish boxer Kellie Harrington. Daly, who came up through the MMA ranks with McGregor at Straight Blast Gym, said:

"The massive thing for me, and it is one that has been overlooked a little bit, is that a man from Ireland, who has never had a professional boxing match in his life, has somehow managed to - through his MMA skills and mostly his verbal skill - talked himself into a fight with arguably the greatest boxer of all time.

"How impressive is that? That's absolutely fascinating... the ultimate blagger!"

From an idea that was roundly dismissed as pure, laughable fantasy, both McGregor and Mayweather have made it reality and, whatever way the fight goes, it is an event that will be spoken on for years to come. McGregor will put his 0-0 record on the line against 49-0 Mayweather and millions upon millions are hooked. 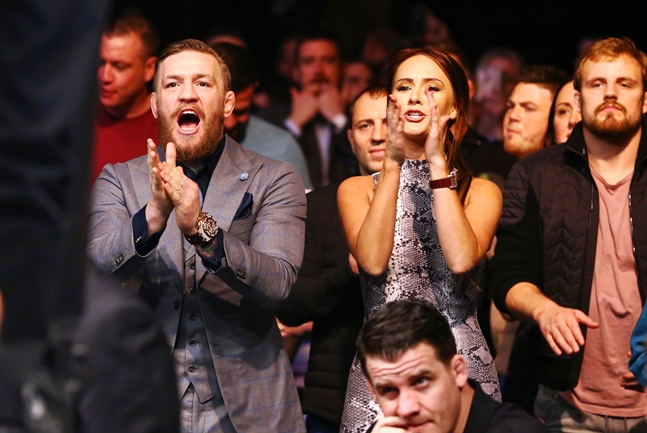 As for the fight itself, Daly feels McGregor's greatest weapon is his unstinting belief in himself and his abilities. She commented:

"That self-belief is unstoppable for Conor. And he definitely believes he has more than a chance for this fight - he knows he is winning."

END_OF_DOCUMENT_TOKEN_TO_BE_REPLACED

The cookie crumbles this weekend is Las Vegas and fans will see which camp has, in the words of McGregor's coach John Kavanagh, has been living in one big delusion.

The fact that the fight is happening, though, is already a huge victory for the Dubliner. Just have the rematch closer to home - like the Heritage in Laois.

Uou can watch the full Mayweather vs. McGregor preview on SportsJOE Live here:


popular
The SportsJOE 12 o'clock quiz | Jack Charlton special (Day 112)
Roy Keane on the experience of being managed by Jack Charlton at USA 94
When the President interrupted a Euro 88 pint between Charlton and Dunphy
"Never back against the Irish" - How the BBC covered our USA 94 win over Italy
WATCH: Amazing scenes at Aviva Stadium as Jack Charlton is given standing ovation
'ROG was the kingpin... he just wanted to win, win, win' - Barry Murphy
"He is a man I genuinely loved. He gave me his support when I needed it most"
You may also like
1 month ago
Dana White faces more retirement questions after Garbrandt and Nunes victories
1 month ago
Justin Gaethje tells Conor McGregor to wait his turn
1 month ago
McGregor the fighter just couldn't help himself
2 months ago
"I'll go to Ireland; do what I gotta do" - Gaethje has plans for McGregor after title fight
2 months ago
"Donald showed up; Cowboy wasn't there. The wrong guy showed up"
2 months ago
"There's never been a rivalry as poisonous. It's an evil kind of buzz"
Next Page