VIDEO: Cheeky Corkman pulls off a hockey panenka with lob of hapless goalkeeper

Thanks to the kind folk in Southern Fried Hockey, we may have found the cheekiest bit of skill we've seen on a hockey pitch this side of Hannukah.

Alan from the organisers of the Munster U21 club championship let us know of a piece of outrageous skill performed by Julian Dale of the Cork Church of Ireland side in a penalty shoot out on Monday and filmed by Connell Deevy. 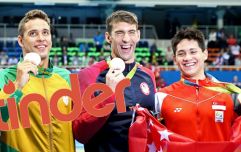 END_OF_DOCUMENT_TOKEN_TO_BE_REPLACED

He was in action in the competition's final at the Garryduff Sports Centre in Cork when he had to face down a heavily padded goalkeeper from Bandon after the match finished 1-1.

Hockey is trying to move away from your traditional boring penalties to decide games and has introduced, as Alan explains

"this version of a shootout is known as "penalty shuttles" and involves the striker starting 23m from goal against the keeper in a one v one - he has eight seconds to score."

Dale was high on confidence after scoring 10 goals on the day and he decided to improvise when his initial shot was saved, by balancing the hockey ball on his stick, before lifting it over the goalkeeper.

Delighted this outrageous piece of penalty shuttle skill from Julian Dale of Cork C of I in the final of the Munster U21...

The cheeky penalty was crucial as Dale's C of I team won the shootout 5-4 to win the competition for the third time in a row!