Mark English ran a clever, composed and absolutely brilliant 800mts on Saturday night, to win a medal for the fourth time in his career at the European championships.

English was just 21, way back in 2014, when he won the first one and, having won two indoor medals since, he showed us tonight, just like he has done so many times before, that he is one of the best middle distance runners on the continent.

We always knew he had it in him.

END_OF_DOCUMENT_TOKEN_TO_BE_REPLACED

The 29-year-old has had some ups and some downs since 2014 - that's the way athletics goes - but at 29 years of age, he really does seem to be in the form of his life right now. And he needed every ounce of it on the Munich track.

That's because, with the World Indoor champion Mariano Garcia and the world outdoor champion Jake Wightman ahead of him, this was one stacked field and English was the best of the rest.

English, who works as a doctor in the Mater hospital, got out fast from the gun and, in keeping tight to the curb, he didn't run a metre over the 800. He was cool and composed as ever and showed class and true speed to hold off the fast finishing Andreas Kramer to take the bronze with his time of 1.45.15.

Afterwards, Sonia O'Sullivan, Rob Heffernan and Derval O'Rourke all hailed his talent and bravery on RTE. 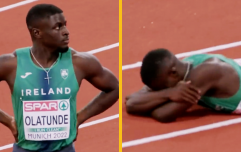 END_OF_DOCUMENT_TOKEN_TO_BE_REPLACED

"Right from the gun, you could see that he was putting himself in position," said Sonia.

"He fought to hold onto that third spot. But he's very patient and very brave to hold onto his spot there on the inside - he doesn't run a metre more than he needed to. I think he really had his mind right this year. He was very close to making the final in Eugene (The World championships), and it's a shame that he didn't, but this is just reward for him for everything he's put in this year," she continued.

"There were years when we definitely questioned Mark," added the Cork woman, who then went onto praise his coach Feidhlim Kelly for getting the best out of him.

"We questioned his commitment. It didn't seem like he cared that much about whether he made it to the final but I think this year, it showed that he really cared. 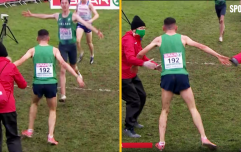 END_OF_DOCUMENT_TOKEN_TO_BE_REPLACED

"Sometimes, when you're getting a bit older, you realise that it won't go on for much longer and you need to remind yourself of why you're doing it and why you enjoy doing it and he's obviously found that enjoyment this year. And I'm sure a lot of that has come from his coach Feidhlim Kelly, who really seems to understand Mark. Feidhlim has worked it out and I think he's done a fantastic job with him this year."

Kelly had his hands on his knees and his head in his hands after the race, and really and truly, Gerard O'Donnell's photo of him shows what it all means.

The bronze by Mark English is the first major championship medal for coach @FeidhlimKelly of @dublintrackclub - who lives, breathes and will die by this sport like few others.

No one has done more to raise standards in recent years.

"We've been all here watching Mark race, and he can break your heart," added Rob Heffernan. That's nothing personal to him but that's just because we know how talented he is. So It's brilliant to see him back competing in this arena, winning a medal here. He's 29/30 now, a bit more mature, he has a better head on him - everything all week, he just looked really, really focused. I know Patsy McGonagle will have bonfires ready up in Donegal tonight.

"This was not a soft line-up," said Derval O'Rourke.

"You had Garcia, the World indoor champion, Wightman, the world outdoor 1500m champion. He was almost snarling in the race, there was no way he wasn't getting a medal tonight."

Ireland's Mark English has won bronze in the men's 800m final at the European Championships in Munich. #RTEsport pic.twitter.com/lynxnyj4CN

Afterwards, English told RTÉ's David Gillick that he left everything out there on that track, and was chuffed with the bronze medal.

"I still have that hunger for it. That's the big thing.

"I just need to power on now."

You may also like
1 month ago
Rhasidat Adeleke lights up tv screens all over Ireland with brilliant run in 400m final
1 year ago
Power has her head in the game before Tokyo dream
1 year ago
"Part of this is for Jerry, and I won't be letting emotions get the better of me"
1 year ago
Super spikes are one thing but Ireland's golden generation have been a long time coming
1 year ago
3 records broken as Ireland's distance runners hit top gear
1 year ago
Nadia Power smashes her own national 800m record by a second and a half
Next Page