That guy is going to be paying for it.

Footage circulating online shows a London Marathon runner absolutely going for it at the start of the race, outpacing some of the world's best pros.

While a big chunk of the 42,000 people taking part in this year's event will be trying to pace themselves ahead of the 26.2-mile stint, one runner went completely against the usual method.

Man speeds ahead of other runners at London Marathon (Image: BBC).

As soon as runners got the green light - or big buzzer - to go ahead, the man could be seen speeding off far in front of the rest of them. 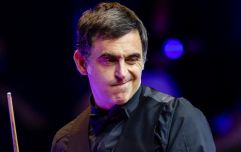 END_OF_DOCUMENT_TOKEN_TO_BE_REPLACED

Remarking on the man's speedy work, one BBC commentator said: "The grand spectacle of thousands coming together in the pursuit of a common goal. Or the ones who look for a little bit of individual glory, like that man at the front there."

Also commentating on BBC, three-time winner of the London Marathon Paula Radcliffe, who used to be the fastest female marathoner of all time, said: "That guy is going to be paying for it". 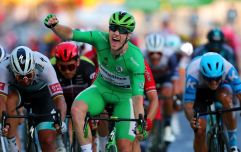 END_OF_DOCUMENT_TOKEN_TO_BE_REPLACED

England women's team footballers Leah Williamson, Ellen White and Jill Scott were invited to mark the start of the iconic event on Sunday. The buzzer sounded at 8.50 am for the wheelchair races, at 9 am for the women's elite race, and at 10 am for the elite men and everyone else participating.

The route started in Greenwich and will see runners take a 42km journey across the capital, ending at The Mall.

Amongst a small selection of famous faces taking part this year is TV star Mark Wright, who had to pull out last year due to injury. Sir Mo Farah was due to participate but had to pull out only earlier this week - also as a result of injury.

It is the third time the London Marathon has been held in October, after being moved because of the pandemic. The event will return to its traditional spring-time slot in 2023.


popular
Roy Keane reacts to Brazil's jubilant celebrations in first half demolition job
World Cup 2022 Day 16: All the major action and talking points
Portugal boss could strip Cristiano Ronaldo of captaincy
Roy Keane handled Gary Neville’s goal celebration as most Irish fans would
Rory McIlroy explains 'falling out' with Shane Lowry that lasted a few years
Roy Keane cracks up ITV pundits with description of Senegal supporters
Ronaldo finally reveals why he got that hideous haircut
You may also like
2 months ago
London Marathon sprinter shares his finishing time
7 years ago
Video: London Marathon late arrival gets her own special send-off
3 months ago
"Or is she? Or is she" - Greg Allen's frantic commentary perfectly captures Louise Shanahan's outstanding run
3 months ago
"To be able to call myself the fastest man in Irish history is just amazing" - Olatunde overjoyed after record-breaking run
3 months ago
The moment Israel Olatunde realised he qualified for the Euro 100m final is what it's all about
3 months ago
"I went up to the Italians and gave them a big auld shoulder" - Paul O'Donovan does it again
Next Page