If you've ever watched Formula 1 racing you'll know that the drivers have radios in the car so they can talk to their engineers on the pit-wall.

It's normally tediously boring stuff about tyre temperatures, mysteriously coded things like "strat mode four, forward two clicks, Nico", or the drivers complaining because someone else just passed them.

Very rarely do you get messages from the drivers about the local flora and fauna. They are usually far too busy burning rubber to notice anything other than the road in front of them.

But in practice for this weekend's Singapore Grand Prix, Max Verstappen got something of a shock when he was flying round the track in his Red Bull Racing car.

"There's a giant lizard on the track! I'm not joking," he radioed back.

Now, to be fair to young Max, this does look like a pretty big lizard, especially (one would imagine) if it runs across the circuit in front of your car while you hurtle towards it at the best part of 200 miles per hour.

Verstappen: "There's a giant lizard on the track!" 😂🐊#SingaporeGP pic.twitter.com/oxJ9csxPEs

"You came face to face with Godzilla then," Red Bull 📻 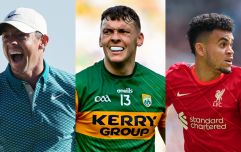 END_OF_DOCUMENT_TOKEN_TO_BE_REPLACED

Qualifying for the race takes place at 1pm on Saturday (UK time), and it's the one race of the year where Mercedes pair Lewis Hamilton and Nico Rosberg might actually not get pole position, with Verstappen and his Red Bull team-mate Daniel Ricciardo expected to take the fight to the Mercs. Lizards or no lizards.

Stephen Rochford chats with Colm Parkinson on The GAA Hour, heated Lee Keegan debate, and Barry Cahill is outnumbered by Mayo backers. Listen below or subscribe here on iTunes.

You may also like
1 month ago
Australian Grand Prix 2022: Start time, standings and TV schedule
1 month ago
Mick Schumacher involved in serious crash during Saudi Arabian Grand Prix
1 month ago
Saudi Arabia Grand Prix to go ahead despite missile strike after F1 drivers agree to race
1 month ago
‘Human error’ judged as cause of for controversial Formula One finish
2 months ago
Nikita Mazepin hits out at Haas' decision to terminate contract
2 months ago
F1 fans sent into frenzy as Netflix announce Drive to Survive release date
Next Page