"When I’m given a job to go out and play for Kilkenny, I’ll do that job regardless of where it is"

Anne Dalton is relishing her new attacking role within the Kilkenny team but insists that she will gladly return to game-keeping once more if that is what manager Ann Downey requires of her in the Liberty Insurance All-Ireland Senior Camogie Championship Final against Galway on September 8th.

Dalton holds the distinction of being Player of the Year in two seasons when the Cats lost the decider - 2009 and 2018.

A three-time All-Ireland club winner with St. Lachtain’s when still a teenager, the now 31-year-old is on a second reinvention in the black and amber, having earned the first three of her six All-Stars as a midfielder, before claiming awards in the past three seasons at centre-back.

This year, Downey has released the shackles on her gifted former skipper and been repaid with a scoring return of 6-11, mostly from centre-forward. Dalton registered a goal and a point in the Semi-Final defeat of Tipperary last Saturday.

Michelle Quilty and Denise Gaule edged past their teammate as Kilkenny’s leading scorer with their hauls of 1-9 and 0-6 bringing them to a total of 3-23 and 0-30, but all of Dalton’s contributions have come from play. 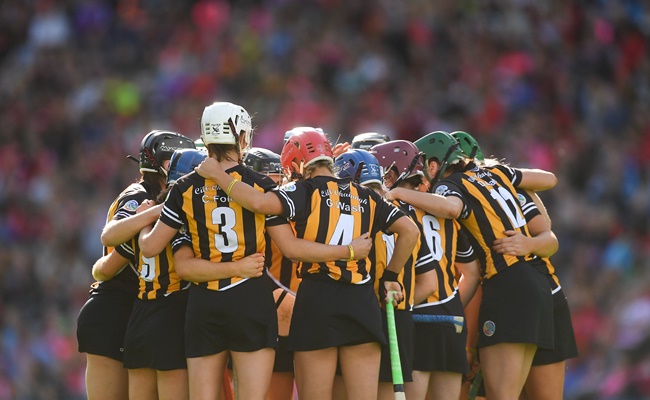 Yet the mother-of-one is happy to do whatever it takes to win a second All-Ireland with the Cats, from what will be a seventh Final appearance.

END_OF_DOCUMENT_TOKEN_TO_BE_REPLACED

“That’s only one All-Ireland out of six and that’s the important thing” says Dalton. “Getting to them is fine but you want to win when you’re there.

“I am enjoying being in the attack but I’ve said it before, when I’m given a job to go out and play for Kilkenny, I’ll do that job regardless of where it is.

“This year it’s in attack.

“If they turn to me in the All-Ireland Final and say, ‘Go back into defence’, I’m gonna do that because I’m gonna do anything that helps Kilkenny win All-Irelands and this is about Kilkenny, not me.”


popular
The SportsJOE 12 o'clock quiz | Day 69
SportsJOE 2000s Football Quiz | Round 1
The SportsJOE 12 o'clock quiz | Day 67
QUIZ: Name these footballers based on their former teammates
QUIZ: Name the footballers to have played for Manchester United & Real Madrid
"I went up to the hotel, got attacked in the room and told I'm no longer Tipperary captain"
"I knew I didn't have the pace or strength, it was just get it and try kick it left or right"
You may also like
3 months ago
"When you play against her she is like a snake, she goes in through you, she's hard to stop"
3 months ago
Dublin and Galway renew rivalry as the National League nears business stages
3 months ago
"The wind made it difficult for everyone, so we're delighted to have got the win"
3 months ago
McGrath shows her absolute class as UL make it five in a row
3 months ago
Marvellous Moloney points the way AGAIN as Tipp claim clutch win
3 months ago
"Waterford respected the decision I made" - From Déise to defence forces and Kildare
Next Page