Vine: By far the stupidest theory on the Seahawks' terrrible play call that cost them the Superbowl

The sincerity in this man's voice is worrying

America is still trying to work out why Seattle Seahawks coah Pete Carroll decided to make that horror play call that ultimately cost them the Super Bowl.

The Seahawks were one-yard from goal on second down and rather than hand the pigskin to Beast Mode to make one of his trademark runs, they made the rather curious decision to attemot a passing play. The ball was intercepted by the Patriots, who went on to claim the Super Bowl. 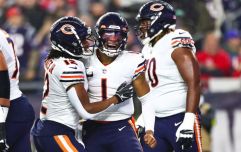 END_OF_DOCUMENT_TOKEN_TO_BE_REPLACED

Carroll's strange call to pass on the play spawned a plethora of absolutely insane conspiracy theories. However, none were quite as jaw-droppingly dumb as this radio show caller's take on what happened to the Seahawks.

The buffoon came to the natural conclusion that Patriots coach, Bill Belichick, using some sort of Jason Bourne-style, tech wizardry,“crashed the frequency” in Carroll’s headset to sabotage the play.

There are a lot of flaws with this theory but the crackpot reckoned he had one key detail worked out. As the quarterback would probably be able to recognise Belichick's voice, the caller reckoned that evil genius Belichick had another trick up his sleeve. The New England coach simply “photoshopped” his voice to sound exactly like Carroll's.

Hat-tip to The Big Lead


popular
Roy Keane flew home from Qatar World Cup as 'fellow pundits were getting on his nerves'
World Cup 2022 Day 20: All the major action and talking points
Psychic lion predicts outcome of England vs France World Cup clash
Talksport presenter puts Martin O'Neill to the pin of his collar over Declan Rice and Jack Grealish
Rory McIlroy explains 'falling out' with Shane Lowry that lasted a few years
Roy Keane reveals what he wrote about England during Senegal game
World Cup Power Rankings: The top eight pundits of the tournament so far
You may also like
3 years ago
Door open for Patriots' Rob Gronkowski to join WWE after Super Bowl LIII triumph
3 years ago
New England Patriots come out on top in Bill Belichick Super Bowl masterclass
3 years ago
Prop punters were not one bit happy about the Super Bowl national anthem
3 years ago
Patriots mascot ends up in hospital after tackle from Jets safety Jamal Adams
3 years ago
The complete spoofer’s guide to talking about Super Bowl LIII
3 years ago
'I'm too old, you're too slow' - Tom Brady fires back at Patriots critics
Next Page