There's life in the old dunk yet.

With most of the league's biggest stars no longer interested in competing, the NBA Slam Dunk Contest has lost some of its lustre in recent years, but last night's duel between Aaron Gordon and Zach LaVine might just have breathed new life into the contest.

Minnesota Timberwolves point guard LaVine, the defending champion, ended up victorious, but he was pushed all the way by Orlando forward Gordon, as the pair put on a show for the crowd at All-Star Weekend in Toronto.

LaVine booked his place in the final with the help of this stunning effort...

Gordon, though, stepped up his game in the final round, using Magic mascot Stuff, who was spinning on a hoverboard, to help him deliver a 360 dunk. 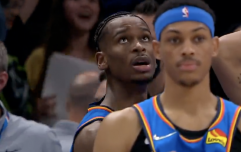 END_OF_DOCUMENT_TOKEN_TO_BE_REPLACED

And when Gordon (and Stuff) delivered this incredible behind the back effort it looked like LaVine's reign as the dunk champ might be over. But the T-Wolves guard had one last dunk in his locker, one which he later admitted he'd never tried before.

LaVine took off a foot inside the free-throw line and went between the legs to seal his victory.


popular
Boris Johnson slams Jurgen Klopp for defending Liverpool fans booing national anthem
Gearoid Hegarty's harsh red card leads to a heated debate in The Sunday Game studio
QUIZ: You have 60 seconds to answer one Premier League goalkeeper question
French media rave about Caelan Doris and 'Playstation rugby' from Leinster
Erik ten Hag criticised after 'tone deaf' Marc Overmars comment
Phil Bardsley in heated tunnel exchange after controversial penalty
Erik ten Hag terminates contract with Ajax early to start work at Man United
You may also like
3 months ago
How The Occlusion Cuff can help build strength, endurance and recovery from injuries at a faster rate
11 months ago
LeBron James taking heat for leaving blowout Lakers loss with five minutes remaining
1 year ago
Zlatan doubles down in LeBron beef, saying athletes should 'stay out of politics'
1 year ago
LeBron James hits back at Zlatan's 'do what you're good at' comments
1 year ago
NBA star Kyrie Irving has bought a house for George Floyd's family
1 year ago
'This is bigger than us' - LeBron and Lakers dedicate NBA title to Kobe Bryant
Next Page