The Golden State Warriors have claimed their fourth NBA Championship in eight years after beating the Boston Celtics on Thursday night.

END_OF_DOCUMENT_TOKEN_TO_BE_REPLACED

Warriors star Stephen Curry scored 34 points and made 6 of 11 from deep in the game six win, and was named the NBA Finals MVP (most valuable player) for the first time in his career.

The championship victory, which is Golden State's seventh in their history, completes a remarkable turnaround for the franchise.

Stephen Curry is the 2021-22 recipient of the Bill Russell Trophy awarded to the #NBAFinals MVP! pic.twitter.com/dNE9V7glu9

END_OF_DOCUMENT_TOKEN_TO_BE_REPLACED

After Steve Kerr was hired as the Warriors head coach in 2014, they went on to win three championships in four years between 2015 and 2018.

But after losing the 2019 finals to the Toronto Raptors, the franchise finished with the worst record in the NBA in 2020 and missed out on the postseason in 2021.

As a result, many thought the Warriors dynasty was perhaps at an end.

The Golden State Warriors have won their fourth NBA Championship in eight years, and Steph Curry is a cheat code 🏆🏀pic.twitter.com/cn92vtRAyK

Instead, the Warriors have stormed to another championship, becoming the first team to go from being the league's worst side to winning the championship in the space of two years.

The Celtics had been searching for a record-equalling 18th championship, but ultimately fell short in their first appearance in the NBA finals since 2010.

It had looked like they may be on course to pick up a first title since 2008 when they won at the Warriors in the first game of the series, and then won game 3 to take a 2-1 lead.

But the Steph Curry-inspired Warriors won the next two games, before wrapping up the series on Thursday, making sure that one of basketball's greatest dynasties is still well and truly alive. 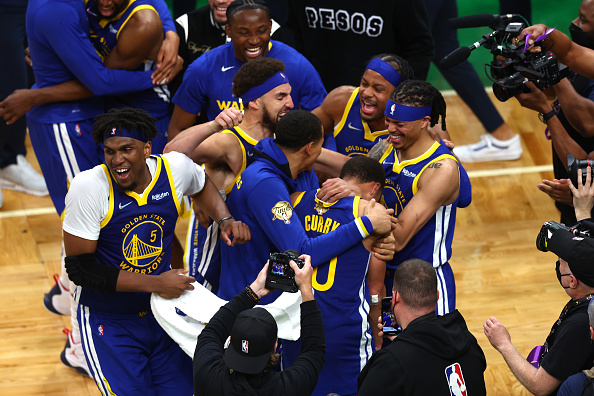 
popular
Everton release brutal 59-word statement to confirm Anthony Gordon departure
Roy Keane flatly rejects longstanding perception of ex-Man United midfielder Paul Ince
British publication urges Gareth Southgate to claim Evan Ferguson for England
Owen Farrell praises Johnny Sexton in revealing interview ahead of Six Nations
Allianz National Football League Round 1: All the action and talking points
Cristiano Ronaldo will return to Europe to end his career, Al Nassr manager confirms
João Cancelo agrees deal to leave Man City for Bayern Munich on loan
You may also like
11 months ago
How The Occlusion Cuff can help build strength, endurance and recovery from injuries at a faster rate
1 year ago
NBA player wins game with 'impossible shot' with less than one second to go
1 year ago
NBA star Kyrie Irving banned by team until he is fully vaccinated
1 year ago
LeBron James taking heat for leaving blowout Lakers loss with five minutes remaining
1 year ago
Zlatan doubles down in LeBron beef, saying athletes should 'stay out of politics'
5 months ago
James McCourt on the brink of Irish NFL history after landmark move
Next Page