We wish we could answer questions by flexing certain parts of our body.

That may not go so well in our mixed office and we may frighten some of the older ladies upstairs.

Oh and we're not Rob Gronkowski who posted a video on Wednesday night responding to the sensational report from Tom Wells into the saga involving the Superbowl champions New England Patriots and their tampering with footballs before the AFC championship game.

Tom Brady has been very much fingered as being part of the alleged messing with the balls along with two other Patriots staff.

The report alleges that he 'probably' was aware of the tampering with the footballs despite his wholehearted denials at a press conference when the controversy emerged.

The Gronk is always good for a quote though and he was nabbed outside a kids charity event on Wednesday by reporters looking for a juicy line on the controversy.

His response was short and sweet as he performed a gun-show for the waiting reporters, 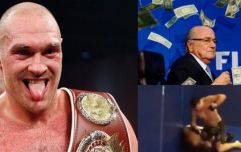 12 scandals that rocked the sports world in 2015

END_OF_DOCUMENT_TOKEN_TO_BE_REPLACED

Late when he got home he posted a more considered response using Bleacher Report’s 'Uninterrupted' video slot to take a severe pop at the media and the report by Tom Wells and goes on to tell the NFL exactly what they can and cannot deflate.

popular
How The Mountain lost 36kg ahead of boxing fight with The Beast
Sam Bennett's green jersey masterclass got Lance Armstrong talking
Irish cyclist Sam Bennett delivers classic putdown to British cycling magazine
"He's found a way to do it. Whether that's good or bad for the game, I don't know"
The SportsJOE 12 o'clock quiz | Sam Bennett special (Day 184)
Les Ferdinand explains why QPR didn't take the knee
QUIZ: Can you name every player to score four goals in a Premier League game?
You may also like
5 years ago
VIDEO: Eric Cartman plays Tom Brady as South Park take the piss out of NFL's 'Deflategate'
5 years ago
Tom Brady's extra-long summer break for cheating has been upheld by the NFL
5 years ago
One of Tom Brady's infamous deflated balls is now up for sale
5 years ago
Angry NFL fans mistake ITV political editor for Tom Brady. His response is absolutely brilliant
5 years ago
Tom Brady hit with four-game ban for role in Deflategate
5 years ago
The Deflategate report is out and it is not good news for Tom Brady
Next Page