VIDEO: Watch out folks, Marshawn Lynch has a new catchphrase for the media

If any journalists thought that Marshawn Lynch would be more forthcoming in another round of media interviews just a day after his infamous 'I'm here so I don't get fined' routine on Tuesday then they really need to get out more.

At Tuesday's media day, Lynch decided that every question he was going to be asked would get a seven-word answer and he even managed to shorten it for the Wednesday session. 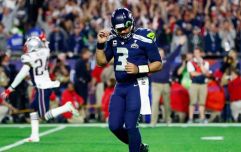 END_OF_DOCUMENT_TOKEN_TO_BE_REPLACED

This time he came up with a five word classic, 'You know why I'm here' which he managed to utter with contempt a whole 14 times during the five minute session.

It really is something to behold but we think it would be better if there was a camera on the faces of the exasperated journalists:

Impressive in a totally bad manners kind of way.


popular
World Cup 2022 Day 10: All the major action and talking points
Iran demand action by FIFA after USA team change flag on social media
Canelo Alvarez duped by fake Lionel Messi Instagram post
"I have equal love for football and hurling" - Sheehy set for two Leinster finals in two hours
World Cup 2022 Day Nine: All the major action and talking points
"I appreciate Moycullen now more than ever" - Cooke's American lifestyle from a Moycullen base
For Ballyea, this journey all started out in a purple Toyota Corolla
You may also like
7 years ago
Last play of the Super Bowl cited as reason for death in Seattle Seahawks fan obituary
7 years ago
PICS: Gronk takes "good craic" to whole new level at the Patriots' Super Bowl victory parade
7 years ago
Video: Tom Brady's pre-Super Bowl speech was powerful stuff
7 years ago
Video: Great time lapse condenses how the Super Bowl half-time show happens into three minutes
7 years ago
Twitter congratulates wrong Butler on winning Super Bowl, he plays along with it
7 years ago
VIDEO: Rob Gronkowski was in tremendous form on Jimmy Kimmel last night
Next Page