"That could be my uncle, my brother, my cousin, my friends..."

George Hill is being hailed for a personal stance that sparked a wave of game postponements and raised awareness of social injustice. The Milwaukee Bucks guard is someone that usually does his best work around the fringes, but he felt it was time to follow his conscience and step forward, front and centre.

The shooting of Jacob Blake by police officers in Kenosha, Wisconsin created a major stir in a country that is populated with citizens trying to educate themselves and push for social justice and others that still cling to the idea of American superiority.

END_OF_DOCUMENT_TOKEN_TO_BE_REPLACED

Blake was shot seven times in the back as he got into his car and his father, Justin Blake, says he is paralysed from the waist down. The incident comes three months into an upsurge in social justice marches and campaigning that followed the killing of George Floyd by a Minneapolis police officer in May.

Players from the NBA and WNBA have worn 'Black Lives Matter' messaging on their jerseys and have taken a knee during the American national anthem during the end of season fixtures that are currently taking place in Florida.

While such actions have raised awareness and started conversations, many NBA stars wanted to scrub the rest of the 2020 season after the shooting of Blake. The Milwaukee Bucks, after a long dressing room meeting, on Wednesday, wanted to boycott game five of their playoff series with Orlando Magic. Once the Magic heard of the Bucks' intentions, they agreed that the game should instead be postponed.

All NBA games were then postponed on the Wednesday and Thursday, with action resuming on Saturday only after a long meeting involving the players and coaches, and some guarantees being made on advocacy and voting rights issues. Several NBA home venues will now be offered up as polling stations during the upcoming presidential election in November. 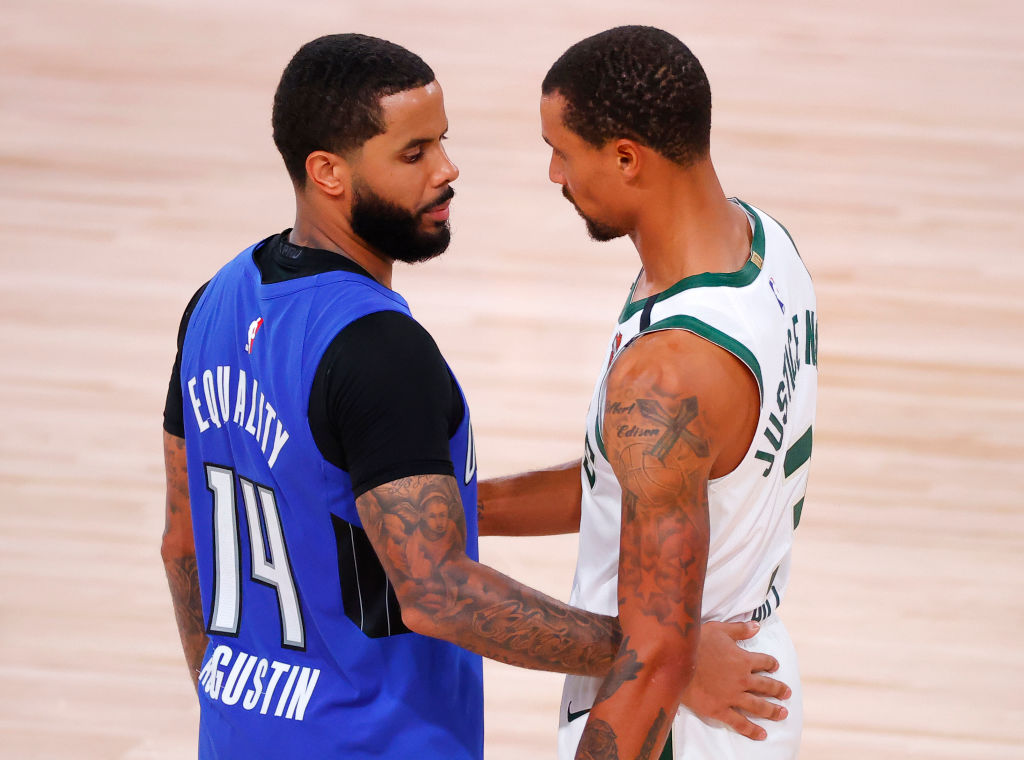 D.J. Augustin of the Orlando Magic and George Hill of the Milwaukee Bucks hug following Game Five of the Eastern Conference First Round. (Photo by Kevin C. Cox/Getty Images)

END_OF_DOCUMENT_TOKEN_TO_BE_REPLACED

On Saturday, game five of that Bucks and Magic series was played out and Milwaukee advanced to the Eastern Conference semi-finals, where they will face Miami Heat, after a dominant display.

Bucks guard George Hill had been the man to spark the postponement of games when he told teammates he did not feel comfortable playing and they, in turn, offered to forfeit the game in solidarity with him. On Saturday, Hill scored 11 points and made three assists as his side advanced to meet the Heat. Post-game, he gave his thoughts on the past few days.

"I just felt disgusted.I felt like things needed to be changed. I was tired all of the killing, injustice and things like that."

"What we did was nothing to get notoriety for," Hill added. "It was nothing that we were doing for a publicity stunt," Hill said. "It’s something that we did from our heart. We were tired of different things going on this world. We wanted action, we wanted [people] to be held accountable and we decided to do this as a team. ...

"In some people’s eyes we're heroes, and when we take this cape off we're just regular human beings. We're people that come from these backgrounds where things are going on. Like myself, I grew up in a rough neighbourhood in Indianapolis and I’m one of those guys. I'm an African American guy coming from a rough place and that person could be me.

"That could be my uncle, my brother, my cousin, my friends, some of my AAU [Amateur Athletic Union] kids in my organisation, and that matters the most. Basketball is something that we’re blessed to play, but at the end of the day, humanity and life are much bigger than what we [have] at stake. I don’t want any credit for it. I just was a human and followed my heart."

END_OF_DOCUMENT_TOKEN_TO_BE_REPLACED

"We want change," said Hill's teammate Giannis Antetokounmpo. "We want to educate ourselves as much as possible. We want to bring awareness to the people."

There was a moment of brevity at the end of Hill's press briefing and one that put to bed any thoughts that he might have been sending out a message of protest.

A reporter noticed that Hill was not present for the American national anthem before the game commenced. Hill considered her question and the following exchange took place.

HILL: You want the honest truth?

HILL: Okay. I take a shit before every game. I've been doing it for the last four years. If you go back and watch any footage of our previous games, before I came to this bubble [in Florida], that's what I do before every game. It just so happened that you guys were snoozing in the hallways and caught me coming back from my pre-game ritual. That's what I always do. That's the honest truth.

As the press briefing wrapped, Hill stood up and remarked, "You guys weren't ready for that, were you?!"

George Hill on why he was in the locker room during anthem "I take a shit every time before the game" pic.twitter.com/vCe5kxcWey

Elsewhere in the NBA, on Saturday, the LA Lakers advanced to the second round of the Western Conference playoffs by seeing off the Portland Trail Blazers 4-1.


popular
Ireland team to play Wales: Andy Farrell's XV, the big calls and bold cuts
Jaden Sancho can't hide his smile as Old Trafford give heartwarming reception
Everton release brutal 59-word statement to confirm Anthony Gordon departure
Discontent over Netflix access for Six Nations documentary as Johnny Sexton focuses on his Last Dance
"Every team did it!" - Paul O'Connell on Roy Keane comment to Ronan O'Gara that he couldn't deny
Owen Farrell praises Johnny Sexton in revealing interview ahead of Six Nations
"It's crazy to think Bundee Aki might come straight in and start against Wales"
You may also like
9 months ago
"It's your mother******* time!" - No hard feelings as Kyrie Irving crowns Jayson Tatum
1 year ago
How The Occlusion Cuff can help build strength, endurance and recovery from injuries at a faster rate
1 year ago
NBA player wins game with 'impossible shot' with less than one second to go
1 year ago
NBA star Kyrie Irving banned by team until he is fully vaccinated
1 year ago
LeBron James taking heat for leaving blowout Lakers loss with five minutes remaining
1 year ago
Zlatan doubles down in LeBron beef, saying athletes should 'stay out of politics'
Next Page