Free pints on a sunny Saturday, with some college football going on to keep you extra entertained - those were the days, my friend.

Issues with WiFi and card readers at the Aviva Stadium, this evening, have led to stadium officials giving out free pints to American Football fans.

Fans that headed along to Lansdowne Road to check out the Aer Lingus College Football Classic, between Northwestern University and Nebraska, may have been put out by the long queues for drinks. Their evening was about to get better, though. 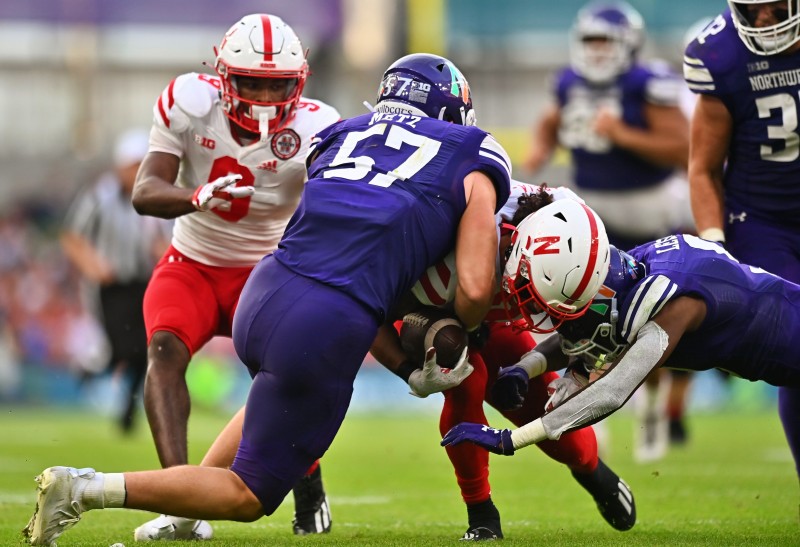 'Best country in the world!'

END_OF_DOCUMENT_TOKEN_TO_BE_REPLACED

With the queues initially caused by difficulty in taking payments for drinks, of the soft, alcoholic and H2O varieties. The call was eventually made to give out free pints to those queuing, and word soon got around the ground.

It led to scenes away from the stands, and down on the pitch, that one college football fan called "pandemonium" while another declared Ireland as 'the best country in the world'. In reality, it is a bit of both.

The queue for alcohol at Aviva Stadium right now because everything is free due to the internet being down. pic.twitter.com/JWS4IxyfxR

The Wi-Fi in the Aviva is down so all pints are free I shit you not! This is the best country in the world 😂😂 #BIG10 #collegefootball

Pay back for the many over paying of pints, it’s free drink at the Aviva, card machines down!! Yup 🙌🏼🙌🏼🇺🇸🏈 #ncaa #aerlingusclassic

At the College Football game in the Aviva where the IT system is down and the tills don't work so they are giving away pints for free. Here's the queue for the bar. pic.twitter.com/gzwvAq4NpU

'Everyone in the Aviva Stadium is losing their minds as all the card machines in the entire stadium have broken,' wrote Sam Reid, 'so everyone's getting free pints. I've never seen so many happy Irish people in all my life.'

Meanwhile, MMA reporter Petesy Carroll was on top of the situation:


popular
Ireland vs Wales: All the big talking points, moments and player ratings
Ireland team to play Wales: Andy Farrell's XV, the big calls and bold cuts
Five confirmed changes and guidelines to have big impact on 2023 Six Nations
Juventus are reportedly ready to terminate Paul Pogba's contract
Everton release brutal 59-word statement to confirm Anthony Gordon departure
GAA defends their handling of Kilmacud Crokes and Glen replay saga
"Every team did it!" - Paul O'Connell on Roy Keane comment to Ronan O'Gara that he couldn't deny
You may also like
2 months ago
Patrick Mahomes shows young pretender how it's done in thrilling Chiefs comeback
2 months ago
Josh Allen and Buffalo Bills left stunned by 'greatest catch in NFL history'
2 months ago
NFL round-up: Patrick Mahomes the hero and Kirk Cousins living his best life
3 months ago
Tom Brady’s year goes from bad to worse as 49ers get themselves a true baller
3 months ago
Bill Belichick makes big quarterback call as Justin Fields win it for Chicago Bears
3 months ago
Taysom Hill puts together one of the most absurd performances in NFL history
Next Page