Rex Ryan was announced, on Tuesday, as the new head coach of the Buffalo Bills and, boy, did they throw a party.

Ryan, who parted company with the New York Jets only last week, was quickly installed in Buffalo and given a great welcome. Soon after Ryan touched down in a private jet, chartered by the NFL franchise, the Bills threw a pizza party. Ryan must not be a Meat Feast lover as the pizza on offer was spinach and ricotta.

We'll have one cheese pizza with extra Rex, please. #WelcomeRex Huge thanks to our friends at La Nova! pic.twitter.com/K1XAdEVZ6Q

END_OF_DOCUMENT_TOKEN_TO_BE_REPLACED

Once the grub was polished off, Ryan was taken around the corner for a beer, at The Big Tree, with Hall of Fame quarter-back Jim Kelly.

On Instagram, Kelly's wife, Jill, posted, 'Well this friendship is off to a good start! A cold beer at The Big Tree never hurt anyone. Wish I could've listened in on the conversation!! Their smiles speak more than words. Welcome to Buffalo and Bills Country Rex Ryan. The Kelly Family is cheering you on!' 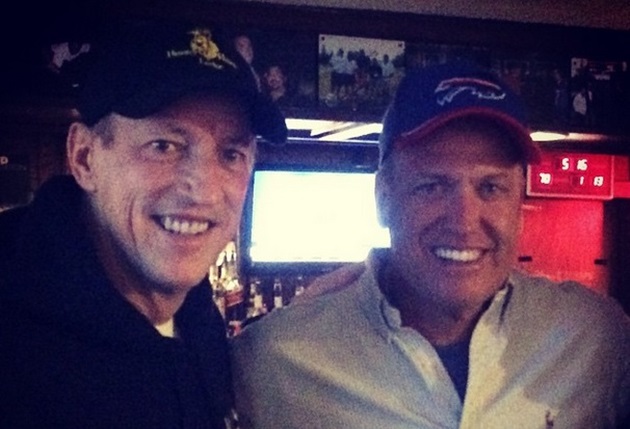 The former Bills quarterback then accompanied the new coach to a Buffalo Sabres hockey game. All the day was short on was a serving of Buffalo wings and some Buffalo Springfield.