"Sorry mate, I did not see that happening."

Rugby teams the world over have a tradition of making the debutants or, in international circles, the new cap sing a song in front of the squad.

END_OF_DOCUMENT_TOKEN_TO_BE_REPLACED

Whether it is 'The Gambler', 'Jump Around', 'Wonderwall' or the Home & Away theme tune, or anything good or bad in between, the newbies have been required to stand in front of their new teammates and crack out a tune.

Sometimes, as is the case with England, players are often coaxed into a tune on the occasion of their 50th or 100th cap. It depends on how easily their arm is bent of how the evening is going.

James Haskell and Joe Marler shared a few cracking stories about songs on JOE UK's House of Rugby and it proves that you'd want to have a pretty thick skin to get up and belt out a number in front of a pack of rugby players.

Haskell recalls former England captain Chris Robshaw stitching him up, after he won cap No.50, at a post-game function at the Millennium (now Principality) Stadium. England had lost 30-3 to Wales to miss out on a Grand Slam and were in no mood to party, but Robshaw still had no hesitation in throwing Haskell under the bus.

"And he was like, 'Come up James'... I just closed my eyes and started singing, 'You never close your eyes anymore, when I kiss your lips' (Unchained Melody). I started serenading these big bits of kit from the RFU and WRU." 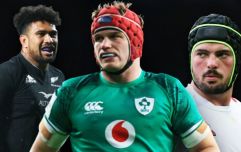 END_OF_DOCUMENT_TOKEN_TO_BE_REPLACED

While they were on a hilarious topic, Marler recalled the 2012 England tour to South Africa. The Harlequins prop and winger Jonny May were both uncapped heading on that tour and were sitting close to the front of the team bus.

Marler made his debut early on the tour - cracking out 'Someone like You' by Adele - but May was left waiting. On one of the long bus journeys, the prop suggested to May that the time was right for him to show off his singing talents.

"I said, 'They won't care, mate. You f***ing get up there. It's entertaining the crowd. You know it word for word'.

So, up gets May and he began to start beat-boxing and singing the Vanilla Ice rap classic.

The reaction he received was instant... and brutal. Marler continues:

Marler encouraged May to keep going and, in fairness to him, he kept rapping through a torrent of a bus.

When it was over, he sat down and dropped his head in his hands. To Marler, and Haskell, the best was yet to come.

"Jonny eventually looks up. 'You said it would be good to get up!'"

The full, side-splitting tale can be watched here from 46:00.

Episode 20 sees Alex Payne joined by James Haskell and Mike Tindall to discuss the third round of the 2019 Guinness Six Nations, England hitting a brick wall in Wales and the lads who could best recover from a big night out.