England prop Kyle Sinckler was caught ripping the Australian players during his side's 37-18 win over the Wallabies on Saturday.

Australian players Kurtley Beale and Adam Ashley-Cooper were both dropped for the game at Twickenham after breaking the team's rules regarding visitors.

Ashley-Cooper and Beale brought three women, including Ashley-Cooper’s sister-in-law back to their hotel following the defeat to Wales two weeks ago.

The extra visitors were reported by other Wallaby players to team captain Michael Hooper’s leadership group with head coach Michael Cheika then making a decision to drop both players for their November test finale with England.

Sinckler was well aware of what had transpired within Wallaby camp and was caught on referee Jaco Peyper's microphone telling the Australian players 'you're all fucking snitches anyway' after a brief melee between both sides in the second-half.

Kyle Sinckler caught on mic to Aussies: "You're all f***ing snitchers anyway!"#ENGvAUS

Box office rustling from the big man who's come out with fire in his belly.

Sinckler wasn't the only player to be caught on Peyper's microphone with Wallabies captain Michael Hooper openly questioning why Peyper did not award Australia a penalty try after Owen Farrell shoulder charged Wallabies lock Izack Rodda just metres before the line. 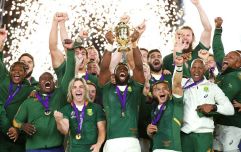 END_OF_DOCUMENT_TOKEN_TO_BE_REPLACED

Hooper: It doesn't matter if it's cynical or not, he's just after shoulder charging our player, which is dangerous.

Peyper: I thought your ball carrier also dropped the shoulder.

Stuart Barnes, Will Greenwood, Michael Lynagh and Clive Woodward all said on Sky Sports coverage that Australia should have been awarded a penalty try and it's very hard to disagree with them.


popular
Carragher pushes all the right buttons and Keane delivers in gold
Jermaine Jenas' reaction to Eamon Dunphy punditry is absolutely hilarious
Conor McGregor's next fight narrowed down to two options
"At the end of it, you're just saying, 'thank God I didn't block that ball down'"
The Tony Kelly show in the storm as forgotten man Shanagher shows his worth
Andy Farrell names Ireland squad for crucial England game
QUIZ: How well do you know Ireland's history at the Six Nations?
You may also like
3 months ago
Kyle Sinckler knocked out by Maro Itoje elbow after only two minutes
3 months ago
Forwards pass - Jerry Flannery on England's game-changers
3 months ago
Springboks must stop England's lightning starts - Jerry Flannery
3 months ago
Combined Ireland and England XV shows how much has changed in nine months
3 months ago
England call up Ben Spencer after injury hits World Cup final preparations
3 months ago
WATCH: England enter the final and dump New Zealand out of RWC with a 19-7 win
Next Page