"Should we get it going sooner, rather than later? Yes, I think we should."

A Women's URC, featuring top club sides from Ireland, Wales, Scotland, Italy, South Africa, and possibly the USA and Canada, is very much up for discussion right now.

The 2022 TikTok Women's Six Nations has highlighted - not for the first time - that France and England are pulling further and further away from the other teams.

END_OF_DOCUMENT_TOKEN_TO_BE_REPLACED

The Welsh Rugby Union has moved to address this by offering paid contracts to 12 of their leading players, and that team already looks the better for it.

Wales, Italy, Scotland and Ireland are all hamstrung by a lack of a decent club competition that pits the best against the best, and lasts for more than a few weeks. Earlier this year, World Rugby chief executive Alan Gilpin told House of Rugby, earlier this year, that England and France were streaking clear, in part, because of their strong domestic leagues. He added:

"Maybe it's fine if the best Irish, Welsh and American female players are playing in those leagues, for a short period of time, to build their own competitiveness. But obviously, over time, there's got to be the best Irish players playing where Irish girls can see them, and be inspired."

Ireland star Stacey Flood spoke enthusiastically about the provinces, here, competing in a Women's Champions Cup, against the best club sides from around Europe.  "Imagine what that could do for women's rugby all over the world, let alone just Ireland," said Flood. "It would be a huge thing to push on with and hopefully, one day, it does happen."

During a conversation with the media, this morning, United Rugby Championship chief executive Martin Anayi has suggested that day could be closer than many would think. 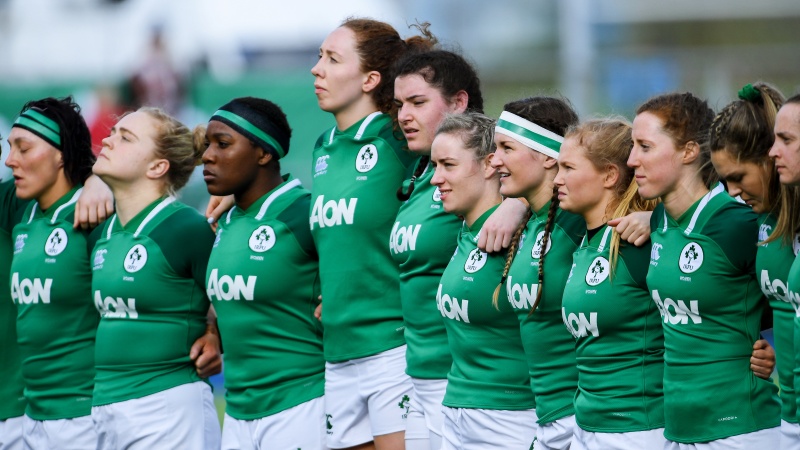 Ireland players stand for the national anthems prior to the Women's Six Nations Rugby Championship match against Wales. (Photo by Ramsey Cardy/Sportsfile)
Advertisement

"It just feels like we should have a women's competition"

With the need for a strong women's club competition apparent, SportsJOE asked URC chief executive Martin Anayi about the prospect of a Women's URC.

"I was speaking to stakeholders about that yesterday," he says.

"Just over half our employee base are women. We had a strategy day, and we asked, 'What are the three things you want to see the URC do over the next five years?' A women's competition came in the top three of everybody.

"I think there's a real push. I don't think it is necessarily reacting to the market. It just feels like we should have a women's competition.

"We've do a lot of work recently, just asking our clubs and unions where they all are. Because we, obviously, don't pay central contracts. We're a tournament organiser. We promote and market games, but we don't pay the players.

"What's really important here is seeing what our unions are doing at the moment, and what is their plan, and how can we help create a better, professional environment, like they are doing in England with the Allianz Premier 15s.

"We're talking to World Rugby about that, as well, because they've got their own Women's 15s competition [WXV]. we are also talking to Ben Morrell and his team at the Six Nations, because they Women's Six Nations is really developing, and we love that."

Players from both teams pose for a photo following the Women's Rugby Friendly between Harlequins and Leinster at Twickenham Stadium, in 2019. (Photo by Matt Impey/Sportsfile)

How a Women's URC could look

Martin Anayi says the URC has been watching closely at how other women's rugby competitions have fared, in recent years, and says there is 'definitely a will' to get a league going that would encompass the unions they regularly deal with.

"We think - and I think that this is pretty widely held, now - that the URC can be a key part in how the Women's Six Nations can get even bigger and stronger. So, we're just trying to work out how we bring that about.

"Should we get it going sooner, rather than later? Yes, I think we should. Because the women's game deserves that. We do have women's teams operating in Ireland, for example. It's as little bit hit and miss, elsewhere. But I think we can pull together a really great competition. That needs to be in conjunction with what the unions would like to achieve, and clubs would like to achieve. Because it's going to take their funding for this to come into fruition.

"There's definitely a will. We'd love to see a Women's URC, and we're just exploring how that would come about now."

Many that follow women's rugby will be excited to hear talk of a decent club competition being discussed, but it is important to note how Anayi mentioned the five year plan when giving an insight into that URC strategy meeting.

It is unlikely such a competition would be in place for next season, but hopefully a decent, meaningful and challenging tournament could be worked around the WXV and Women's Six Nations.