The social media presence of a rugby player is something we may not think about too often, writes Megan Joyce.

A high-profile wing or back-row tweeting about their latest pair of Adidas Predators, embarrassing teammate anecdotes, or what they had for dinner gives us an insight into the person as well as the player.

A discussion of worldly issues and the promotion of charities via the RT button also provide us with their opinions and perspectives on life.

Here are some of the top Irish rugby players currently active on our Twitter feeds:

Henshaw keeps his finger on the pulse when it comes to generating awareness via his feed, regularly tweeting about Aviva Health school initiatives, Ataxia Ireland and mental health programmes.

The Connacht man will keep you updated on his Audi, Adidas RS7s and how he relaxes after a hard day’s training. Henshaw also tweets links to his Life Style Sports blog, where you can read his pre and post match thoughts, as well as his views on the wider issues surrounding the game.

Henshaw unwinds at a waterpark in Dubai: 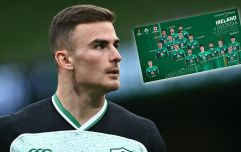 END_OF_DOCUMENT_TOKEN_TO_BE_REPLACED

Jackson’s feed gives us an insight into life at Ulster rugby from all angles. The province’s star keeps us updated on the activities, which go on both inside and outside of camp.

Whether it’s a team dinner in one of Belfast’s tasty restaurants, a day of bonding on the golf course or a charity event, the playmaker has his phone at the ready. A real team tweeter, Jackson gets everyone involved at Ulster.

Jackson and Ulster’s Iain Henderson on the radio:

McFadden loves his sport and loves to tweet about it. Whether it’s horse racing, golf or the El Clásico, the Leinster paceman will always have an opinion or a witty line to add to his character count.

Expect to find the hashtag #LFC at the end of McFadden’s Twitter contributions or you can find him splashed across Mike Tyson’s feed. The former heavyweight champ receives regular notifications from the Kilkenny man, who is his number one follower.

McFadden’s dreams of playing for Liverpool may be answered one day:

The cheeky chappy of Irish rugby certainly lives up to his mischievous reputation on Twitter. If he’s not acting as a cameo in one of Hermitage Green’s music videos (his brother-in-law’s band), Zebo is tweeting pictures of himself posing next to the latest, hot off the production line BMW.

According to his tweets, the Munster wing has a bit of an obsession with Beats by Dr. Dre, the headphones everyone is after. Zebo is also the king of the selfie, whether it’s after a training session, during a shoot for a sponsor or just for fun, he’s mastered it.

A Zebo selfie outside a Garda college: 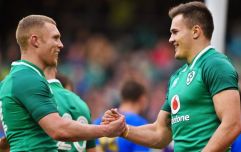 END_OF_DOCUMENT_TOKEN_TO_BE_REPLACED

Healy is well known for his artistic skill away from the rugby pitch and his Twitter account is no different. The part-time artist will wow you with his latest creation or sketch and if that’s not enough, visit Healy’s profile for information on his DJ gigs. Yes, the Leinster powerhouse also goes by the name of DJ Church.

There are three very important faces that regularly pop up on his feed and they go by the names of Ralph, Hank and Ted. Ralph is DJ Church’s turtle, while Hank and Ted are his two dogs. Healy’s pug Ted is currently centre stage in his profile picture.

The Irish prop also enjoys tweeting about his teammates:

Nothing like getting mauled by hank pre 7am... Nearly took me to the ground!! pic.twitter.com/CNZ1yMG73I


popular
McGregor admits shout from Dustin Poirier's corner got inside his head
Roy Keane story shows the power he had at Manchester United
McGregor's first words to Poirier after defeat show where the damage was done
Jolie Poirier certainly let her voice be heard after her husband's win over McGregor
Dustin Poirier annihilates Conor McGregor to earn stunning UFC 257 victory
Khabib Nurmagomedov reacts to Conor McGregor's shock UFC 257 loss
Bruno Fernandes training ground story proves he was perfect man for free-kick
You may also like
9 months ago
"It maybe feels like we don’t deserve all of this... It hasn’t hit the surge yet" - Dr Claire McLaughlin
10 months ago
The 9 best home exercises to keep you pumped if gyms are closed
10 months ago
Leinster's Ryan Baird included in Ireland training camp squad
10 months ago
Guinness Pro14 preview: Leinster v Glasgow
11 months ago
Guinness Pro14 Preview: Ulster v Cheetahs
11 months ago
"The Triple Crown is still a major, major achievement."
Next Page