One for one for Donncha O'Callaghan.

In the water bottle fight stakes that is...

Worcester Warriors' new Irish recruit made it a winning start at the weekend with a shock debut victory over Northampton Saints.

The Munster legend played the full game as his new side ran out 13-12 winners in their Premiership opener but it was clear to see exactly where this game was won.

Don't give them an inch and all that. Never back down, they say.

Well, in a bizarre incident that gets more wonderfully strange every time you watch it, O'Callaghan had the slightest, most unnecessary run-in with a Northampton coach who was carrying the water. 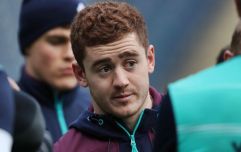 END_OF_DOCUMENT_TOKEN_TO_BE_REPLACED

The Irishman simply wanted a bit of hydration, the water boy pulls the crate away from him, O'Callaghan reaches more assertively and gets what he wants. But even when he's drinking, the Saints man comes back and tries to pull it out of Donncha's mouth.

popular
Sean Cavanagh speaks nothing but sense about what GAA players should do in the gym
The SportsJOE 12 o'clock quiz | Day 309
Robbie Henshaw one of three Irish players deserving of Lions Test XV
Marcus Rashford and teammates reach out to Timothy Fosu-Mensah after knee injury
Referee Mathieu Raynal puts Sexton in his place after TMO mess
Welsh star backs Ringrose and Henshaw for Lions backline
"I feel it is important to provide people with some context surrounding this photo."
You may also like
2 years ago
Respected English rugby writer proposes three Irish provinces for new super league
2 years ago
Declan Kidney and Les Kiss land Irish job
3 years ago
Donncha O'Callaghan is getting some slagging for dramatic reaction to slap
3 years ago
Denny Solomona's chip and chase try is just too damn good for rugby
3 years ago
English rugby star poses for rival supporter's photo despite awful facial injury
3 years ago
Long-serving rugby player discovered he would not get new contract in worst possible way
Next Page