If Jose Mourinho can hire professionals and Eden Hazard can get in a fight with them, then we know the age of the ballboy is changing.

Manchester United are now using academy players to get the ball back into play and, at the RDS, it seems the ball boys are also being treated like the players.

During Leinster's comprehensive win over Scarlets in the Pro12 on Saturday, the referee largely kept his cards in his pocket. But he made an exception for the ballboy, whom he booked for having the cheek to whack him with the ball. 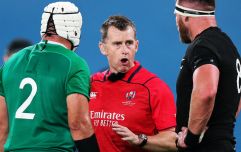 Nigel Owens on the one law change he'd love to see

END_OF_DOCUMENT_TOKEN_TO_BE_REPLACED

Nigel Owens has a reputation for speaking his mind on and off the field. Not shy to poke fun at players or himself, he is about as popular as a rugby referee can hope to be.

With a smile Owens whipped out a card and showed it to the scamp.

Get on that exercise bike and think about what you've done, kid.


popular
Galway fans' frosty reception for Davy Fitz doesn't make any sense
The most Stone Age tackle you've ever seen gets South African lock straight red card
'Brian was a genius... he would've killed you to even win a game of touch'
"Johnno went, 'We’re not moving! You're trying to mess us about!'" - Ben Kay recalls red carpet controversy
Ryan Manning hacked to the ground by Henri Lansbury in ruthless assault
Wallabies star bounces off Duane Vermeulen like a brick wall, gets yellow-carded
Final question of Ryder Cup press conference has Team USA in all sorts of trouble
You may also like
10 months ago
"She wrote, 'I’d like to thank you, because you’ve saved my son’s life'"
1 year ago
Nigel Owens on how the O'Driscoll and O'Connell captaincy dynamic worked
1 year ago
Ireland need to play Nigel Owens, as well as New Zealand
1 year ago
Nigel Owens lets Kyle Sinckler and Manu Tuilagi away with two borderline tackles
2 years ago
Cheetahs prop very lucky to avoid red card for late hit on Fergus McFadden
2 years ago
TG4 applauded for showing pre-match Nigel Owens chat in Connacht dressing room
Next Page