WATCH: New Zealand grab the bronze with 40-17 win over Wales

It was the game that nobody wanted to play.

New Zealand took on Wales to fight it out for a bronze medal at Tokyo Stadium. Both teams arrived here having lost their semi-final ties against England and South Africa respectively. New Zealand, admittedly, was the more surprising inclusion of this game as few would've expected them to miss out on the final. The last time NZ lost two World Cup games in a row was back in 1999 and today's result would ensure that remained unchanged.

History was against the Welsh for this tie - NZ hadn't lost to Wales in nearly 66 years (1953) and the All Blacks have won the following 30 test matches ever since, which happens to be the longest winning run ever against a Tier-1 nation in Test history. Additionally, during Steve Hansen's 106 games in charge of the All Blacks, his team have won 92 games, drawn four and lost just 10.

END_OF_DOCUMENT_TOKEN_TO_BE_REPLACED

Five minutes into the encounter and New Zealand stormed out of the gates as they sliced through the Welsh defence to find Joe Moody who stumbled over the line for a try. Richie Mo'unga added the extras with ease.

New Zealand kept at it and it was Beauden Barrett who scored after snatching a slick offload from Aaron Smith. The full-back danced past some defenders to touch down between the posts for five easy points. 14-0 the score read after Mo'unga's conversion.

But then..a lifeline for the Welsh. Gatland's men worked relentlessly through the phases before flicking the ball out left to find Hallam Amos who strolled past the line to score. Rhys Patchell grabbed the two points. 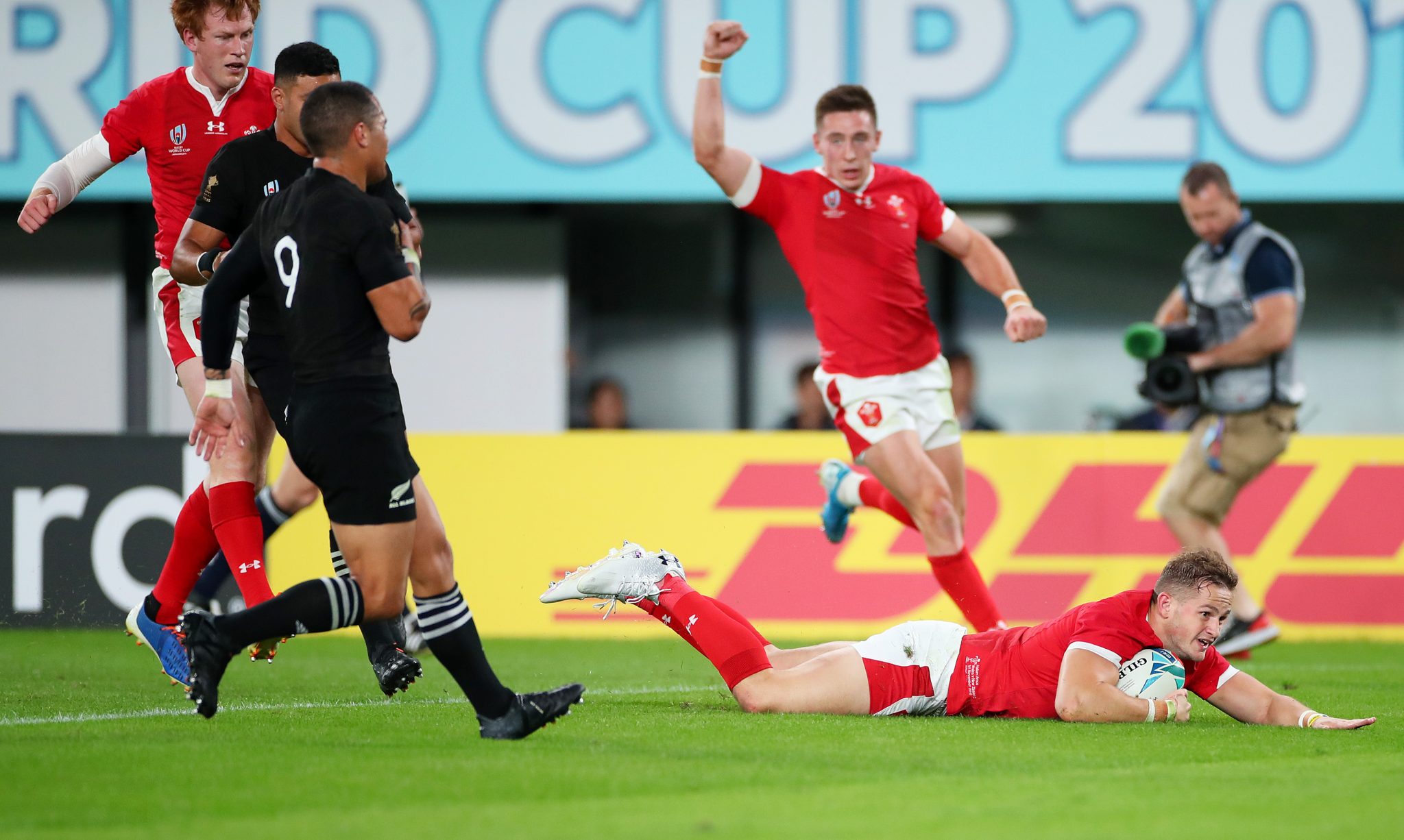 END_OF_DOCUMENT_TOKEN_TO_BE_REPLACED

Nearly half an hour into the encounter, Wales received a penalty and Patchell added three points for a tight score of 14-10.

A couple of minutes later, after a brilliant win at the ruck, the All Blacks flicked it left to find a thundering Ben Smith who hurled over the line with Welsh defenders hanging onto his coattails.

With halftime moments away, New Zealand sealed the game as Smith left Tomos Williams in a heap to cross the line for the second time in the game. The half came to a close with Hansen's men comfortably ahead with a score of 10-28. 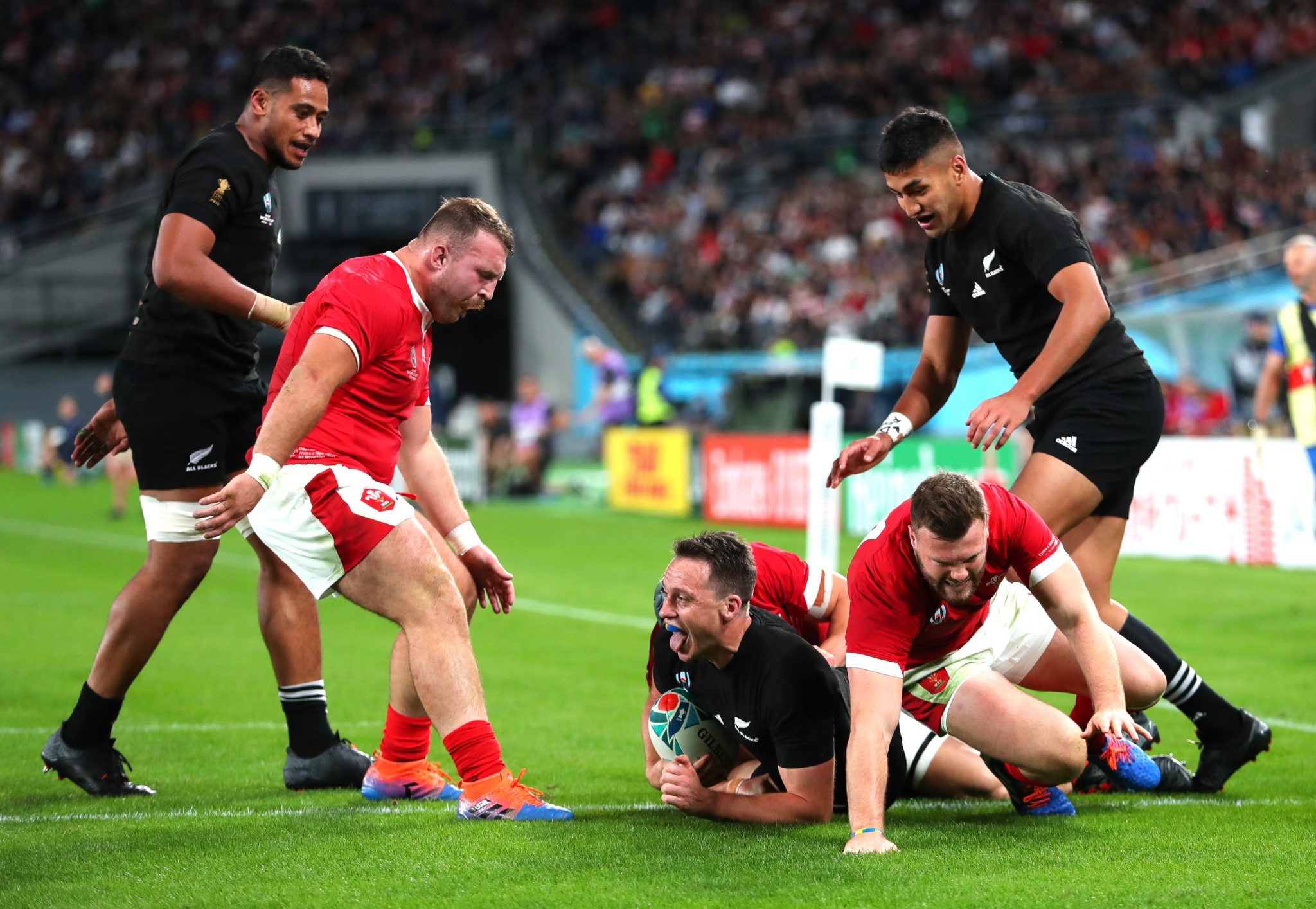 END_OF_DOCUMENT_TOKEN_TO_BE_REPLACED

The second half rumbled into life and it was more of the same.

NZ began the second half same way the finished the first - with a try. Sonny Bill Williams did brilliantly to dodge a tackle and find Ryan Crotty who slammed over from close range. The three-time champions were enjoying themselves and the 10-35 scoreline certainly reflected it.

The Welsh certainly didn't take the score lying down and nearly an hour into the game, they got their second try. Josh Adams scooped the ball from the back of the ruck before charging through a gap to touch down. Dan Biggar added the extras for a score of 17-35.

7 - Josh Adams has scored 7 tries at #RWC2019, the most by a @WelshRugbyUnion player in an edition of the tournament, surpassing @ShaneWilliams11's tally of 6 in 2007; only three players from any nation have scored more at a @rugbyworldcup (Lomu, Habana, Savea). Heaven.#NZLvWAL pic.twitter.com/c6AH1cKIQ8

Entering the final 10 minutes of the match, New Zealand added the icing on their cake as Mo'unga jumped on the scoring bandwagon. After overpowering the Welsh forwards at the scrum, Brad Weber found Mo'unga with a precise pass before the fly-half crossed over for the try.

And so it finished in Tokyo with a final scoreline of 40-17 to New Zealand.

This match turned out to be Welsh coach Warren Gatland's swansong game in charge; throughout his 12-year tenure, he has only failed to beat one team - New Zealand. And unfortunately for him and his side, that record continued today. Regardless, this man deserves nothing but applause for his contributions to the development of Welsh rugby, what he has achieved during his stay has been nothing short of remarkable.

"To finish fourth in this World Cup, and with a five-day turnaround, I am really proud of the guys and the way they performed in this tournament."

"We will reflect and be honest. The better team won - we have just got to take defeat on the chin."

"We can enjoy tonight and celebrate what we have achieved, not just at the World Cup but for all the players and staff who have been involved in the past 12 years."

"I have loved my time in Wales, it's a brilliant country to be a part of."

As for New Zealand, they will have no qualms about this game - they wanted the final and this result will do little to quell the pain of missing out on a chance to win their fourth WC trophy. Despite the commanding victory today, this campaign will still be viewed as a failure back home but both Hansen and his men deserve credit for their performances throughout the tournament. It was just one poor game and an exceptional England side that ended their WC dreams.

127 - Kieran Read has won his 127th and final cap for the @AllBlacks, taking him into the top 10 most capped players in Test history (level with V Matfield in 10th), it was a 52nd game as skipper of the side, managing an 83% win rate as captain. Farewell. pic.twitter.com/4iVQ1t0Ori

Hansen too, bids goodbye to his beloved team after an incredibly successful tenure which he described postgame as "a privilege". His reign oversaw his side win two consecutive World Cups and lose just one WC game.

He offered some parting thoughts:

"All tournament we have had good defence and we have played pretty good footy all the way through, but you have one bad day and you get knocked out. That is what knockout footy is all about."

Four weeks and 47 matches later, we have arrived at the crucial juncture of crowning the Webb Ellis Cup Champion. All that remains to be seen is who among England and South Africa is capable and hungry enough to write their name in the history books and land the coveted trophy.


popular
From Ireland to Argentina: Alexis Mac Allister's Irish roots explained
France demand FIFA change result of World Cup defeat over 'rule break'
World Cup 2022 Day 12: All the major action and talking points
The World Cup 2022 team of the tournament so far
Ronaldo finally reveals why he got that hideous haircut
Argentina reach World Cup last-16 with convincing win over Poland
The FootballJOE Qatar World Cup 2022 Geography Quiz
You may also like
3 years ago
"It was a complete and utter shock when Joe's name came up on my phone" - Devin Toner
3 years ago
Sinckler a stand-out, but more consistency needed - Flannery
3 years ago
"We haven't got a long-term or short-term estimate of when Joey is back" - Stephen Larkham
3 years ago
House of Rugby team agree on seven players in World Cup 'Best XV'
3 years ago
Pieter Steph Du Toit locks down World Player of the Year award
3 years ago
Kyle Sinckler knocked out by Maro Itoje elbow after only two minutes
Next Page