Ardie Savea proved his last remaining doubter wrong with a two-try salvo and a man-of-the-match performance in the Hurricanes' 27-20 win over the Highlanders.

Last year's Super Rugby champions gave it a fair rattle in Wellington but their hosts had too much power and pace to handle. It was a small measure of revenge for the 'Canes after they lost last year's final. 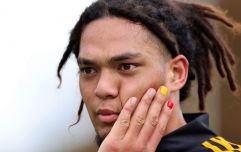 At a time when rugby needs genuine characters, Naitoa Ah Kuoi could not have timed it better

END_OF_DOCUMENT_TOKEN_TO_BE_REPLACED

Moment of the match, though, was surely this overhead kick pass from the Highlanders' out-half that bamboozled the hell out of the Hurricanes.

Shaping to pass to teammate Malakai Fekitoa, Sopoaga then hooked a no-look kick over his shoulder. It took five players out in one motion, bounced up for Matt Faddes and led to a break that gained the Highlanders 50 metres.

Do not expect to see Joe Schmidt's Ireland pulling out this move in South Africa.