WATCH: England winger Chris Ashton could be in trouble again after alleged bite

This lad just can't help himself.

Missing England's triumphant Six Nations campaign for trying to have a feel of the back of Luke Marshall's eye should still be fresh in Chris Ashton's mind as the November Internationals hove into view.

However the Saracens winger could well be facing down the barrel of another lengthy ban after footage emerged on him seemingly trying to take a chunk out of Northampton prop Alex Waller.

END_OF_DOCUMENT_TOKEN_TO_BE_REPLACED

Yep, the front-rower's meaty hand looked so tempting to Ashton that he appears to try and take a bite out of it. The gumshield stopped the league convert from doing any serious damage, but Waller was convinced he had been bitten and told the referee as much. 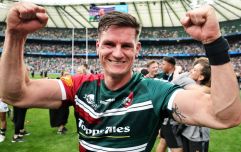 END_OF_DOCUMENT_TOKEN_TO_BE_REPLACED

Saracens director of rugby Mark McCall admitted his winger would well be cited for the incident: "I have heard the accusation. I haven’t seen the incident.

"These things will run its course. I suppose there is a good chance Chris will be cited as a result so we will see what happens."

Ashton's England captain, Dylan Hartley will be so disappointed.