Two-time Rugby World Cup winner Tim Horan has said that he does not want to see Wallaby backrowers David Pocock and Michael Hooper start alongside each other in the upcoming three-test series against Ireland next month.

Hooper and Pocock are among Australia's best players and they both played alongside each other in five of the Wallabies six games during the 2016 Rugby Championship.

Pocock took a sabbatical from rugby last season to spend some time in South Africa and Zimbabwe but returned to Super Rugby this year with the Brumbies.

END_OF_DOCUMENT_TOKEN_TO_BE_REPLACED

The veteran flanker is expected to be included in Michael Cheika's test squad on Wednesday but Horan wants Pocock to start from the bench as opposed to playing at number eight alongside Hooper.

“Personally I am not a fan of having David Pocock and Michael Hooper in the same side,” said Wallaby legend Tim Horan on the Fox Rugby podcast.

“Only because we have lacked size in the backrow for a long time when we have the Pocock and Hooper combination. Me personally, I’d put Pocock on the bench with him coming on for impact with about 30 minutes to go. 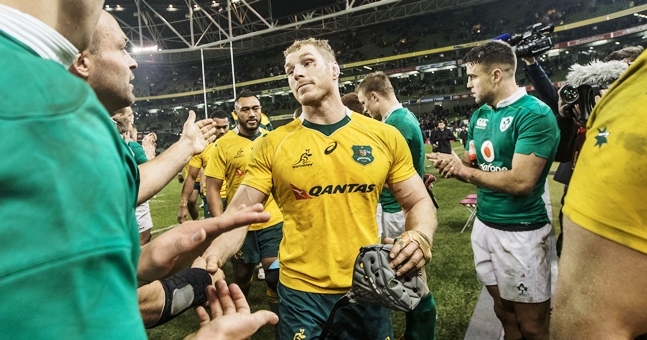 END_OF_DOCUMENT_TOKEN_TO_BE_REPLACED

“I just think we need to get back to two big backrowers – a number eight and number six who can cart the ball over the advantage line, put some hits on, offload some balls. Who they are, there is a mix of players but I think [Cheika]will pick Pocock and Hooper . . . but I think we are getting out muscled there.

“The gameplan, especially when you play on dry rugby pitches in Australia, you want to play open and expansive style and that suits having Hooper and Pocock, but you still need to lay a platform for the backline and that’s by going forward.”

"They [Ireland] will kick to contest a lot, they won't want to give our guys any space," Malone said.

"The big area Australia will be working on, I would imagine, is how they retreat on those kicks. They [Australia] are going to try and find and free up some time in terms of how they then build their attack out of those contested possessions and a lot of that will come down to their ability to get off the ground and work hard.

"I know [Wallabies coach Michael Cheika] will be big on the effort of our team to get back behind the ball in those situations. Particularly with Israel he's the best in the world in the air so if they're going to kick to contest I'll be backing him to win most of those possessions."


popular
"I went up to the Italians and gave them a big auld shoulder" - Paul O'Donovan does it again
Wexford, Waterford and Kilkenny down some good men as Australia calls
Wexford Under-20 lights it up as Ferns win their first ever county title
Man United have 'decided to sell' promising midfielder James Garner
Graeme Souness under fire for calling football a ‘man’s game' while sat with Karen Carney
Luke Chadwick recalls furious Alex Ferguson reaction when he rejected loan move
Erik ten Hag's training ground punishment for Man United shows there may be hope yet
You may also like
2 weeks ago
“My confidence was on the deck" - Aaron Connolly explains why he has made the move to Italy
2 weeks ago
Every Irish transfer in football, this summer, as several big deals get done
3 weeks ago
Six Irish players make damn impressive 'World XV' that would take some beating
3 weeks ago
The frontrunners for Ireland's 33-man squad for the 2023 World Cup
3 weeks ago
All Blacks media manager explains why Ian Foster appearance was cancelled after Ireland defeat
3 weeks ago
Warren Gatland selects nine Irish players in his strongest Lions XV, right now
Next Page