Andy Farrell's side rallied from 6-0 down to lead 13-6 at the break only for Wales to make the numbers count in the second half. The fight showed by Ireland was breath-taking but sloppy errors at crucial moments, and clinical Welsh finishing, did for them.

END_OF_DOCUMENT_TOKEN_TO_BE_REPLACED

Ireland have never had it easy when Wayne Barnes is referee and he was hot on his whistle, against them, in the opening 10 minutes. Leigh Halfpenny put Wales 3-0 ahead but Ireland pressed to get a foot-hold in the game.

Irish supporters could have no complaints when Barnes flashed a red card in Peter O'Mahony's direction after he connected with the head of Tomas Francis when clearing out a ruck. Halfpenny put Wales 6-0 ahead, soon after, and Ireland were in a hole.

They dug their way out superbly in a tremendous show of heart as they earned two penalties for Johnny Sexton to slot over. All level was soon a 13-6 Ireland lead as Tadhg Beirne finished off for a score after a brilliant Robbie Henshaw break. 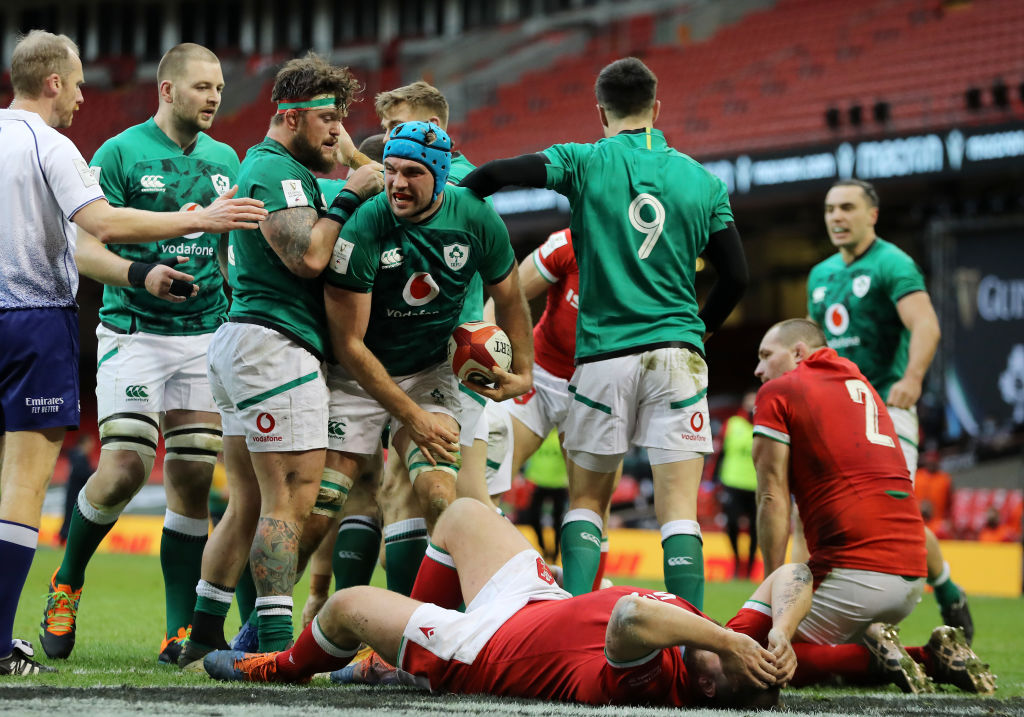 END_OF_DOCUMENT_TOKEN_TO_BE_REPLACED

The big question was how long Ireland could repel the Welsh with only 14 men while hoping to keep the scoreboard ticking over on their side.

The answer was nine minutes as Josh Navidi's smart offload, after Ireland squandered possession, teed up George North. He bamboozled James Lowe to go over unopposed. Halfpenny missed the conversion so Ireland were still a nose in front.

There were question marks over Lowe, on 59 minutes, when Louis Rees-Zammit got over in the right-hand corner after some lovely hands by Halfpenny took out Hugo Keenan. This time, Halfpenny nailed his conversion and Wales led by five points. That lead was eight when Barnes harshly whistled against Beirne at the breakdown and the Wales fullback dinked over the ball.

Billy Burns replaced a rattled Sexton for the closing stages and popped over a close-range penalty as Ireland got back to within a score.

END_OF_DOCUMENT_TOKEN_TO_BE_REPLACED

Ireland rallied superbly and won a late penalty but Burns got greedy looking for yards and put his kick out on the full. It was that sort of day.

Another commendable outing by Keenan as his Test match reputation grows. Made 76 metres off 12 carries (two line breaks in there) and was confident in the air, and in the back-field.

Mr. Kick-chase. That was Earls' brief all day. It didn't always go Earls' way but he did win back a couple of key possessions, or force Welsh mistakes, as he hared after Murray's box-kicks.

Will be livid with himself for trying an offload and putting his side under the pump just before that George North try. Got through his defensive duties well, and put his hand up for carries, and provided a late line break to give his side hope.

Having an outstanding season and he was Ireland's best player today. Carried with intent and made a great line-break that led to the Beirne try. Made 17 carries and stuck every tackle he went for in defence.

Not the finest day for the Leinster winger, who came into the match having not played for 11 weeks. His big boot was a hand weapon but he was caught out in defence for the North and Rees-Zammit tries. In attack, he was all about forward momentum - 17 carries for 117 metres.

Sturdy in defence and kept his team ticking over as they came back into the tie. Costly error when he failed to find touch, with 12 minutes to go, when Ireland were awarded a penalty. Game was ended after he took an accidental knee to the head.

Excellent game-management in the first half, especially when Ireland went down to 14 men. Gave away a penalty for obstructing the kick-chaser to scrub out James Lowe's super aerial take.

Three carries for not much change and missed three of his seven tackle attempts. On the plus side, did his job at the scrums and was effective around the breakdown, especially when clearing out for that Beirne try.

Puts an awful lot of air on his lineout throws, giving the opposition a fighting chance to steal or disrupt. Gave away a penalty for a seat-belt tackle but his effort cannot be questioned. Gave it his all.

A demon for work and made a series of dominant tackles in defence.

One of his best games in the green jersey as he covered just about every blade of grass in Cardiff. Heroic work-rate and caused the Welsh headaches at the breakdown all day. Got over for a try that gave Ireland belief. Harshly penalised by Barnes when he looked to have secured a turnover in front of his posts. Then gave away a more obvious one at a lineout, in the final minutes. Made 20 carries in a mammoth shift.

Look out for the Healy clear-out 👀
pic.twitter.com/mihDuRy5w5

Six tackles and seven carries. Was going well until he took a blow to the head and did not return.

Stuck some good tackles, early on, but was penalised at the breakdown to give Wales their first score. On 13 minutes, his rash and forceful clear-out on a prone Tomas Francis saw him become Ireland's first ever player to see red in a Six Nations game.

Lovely support line for that Beirne try. Ireland showed great line-speed for the first 50 minutes, until they collectively flagged, and this man was the dynamo.

A shift and three-quarters from Stander. Was the go-to man for carries and got his team front-foot ball all afternoon. Man one fearsome carry that skittled Toby Faletau.

Came on for Ryan after 24 minutes and delivered in spades. Made a slew of big hits and carries.


popular
The four stone-cold certainties for All-Stars even as early as this
Kylian Mbappe reportedly wants PSG to sell Neymar
Eamon McGee just couldn't help himself with Armagh-melee tweet
"The economy was one of the big reasons" - Cadogan's move from an electrician to personal training
Gavin Coombes one of four Irish players to push themselves into Test picture
"He's actually smiling putting the ball over the bar. He should nearly be fainting." - Ryall on Limerick's legacy
Richard Keys tears into Gary Neville over 'nonsense' new book

You may also like
20 hours ago
Bundee Aki understandably emotional, as Ireland pay moving tribute to late Sean Wainui
21 hours ago
Full Ireland player ratings after Maori All Blacks teach us an early lesson
1 day ago
"We could lose all five games" - Darren Cave with a rare take on Ireland's chances
1 day ago
Mike Lowry and Peter O'Mahony in First Test contention as Ireland shuffle deck
2 days ago
"Significant" knee injury ends Iain Henderson's tour of New Zealand
2 days ago
Ireland include plenty of new faces in team to face Maori All Blacks
Next Page