The three-time European champions have fired back.

Less than five hours before Leinster were set to face off against Toulon in a Champions Cup last 16 clash, word came through that the match was cancelled.

Tournament organisers EPCR confirmed the cancellation and left rugby supporters with a 'more to follow'. Into that information vacuum strode Toulon, who fired off a strongly worded statement on the matter.

END_OF_DOCUMENT_TOKEN_TO_BE_REPLACED

First up the important news, and an update that is set to see Leinster advance to the quarter finals of the competition, if an alternative date cannot be found for the game. A Toulon player from the senior squad returned a positive Covid test after testing was carried out before the squad set off for Dublin.

Although all of the squad that travelled to Dublin returned negative tests, on Thursday, it was deemed that the player who had been left at home had been a close and 'high-risk contact' of him.

The EPCR got back in touch with Toulon and asked if it was possible for the game to take place on Sunday if they could replace the six senior players that were deemed close contacts of their 'positive' teammate. The club informed the organisers it would be "an impossibility". A statement on their website reads:

'This is once again proof of the errors linked to the organisation of European competitions. The EPCR left the players and staff to go to Ireland, prepare for the match, only to deprive them a few hours before kick-off from participating in this major event.

'Rugby Club Toulonnais strongly deplores this decision and sends its thoughts to all its supporters who were eagerly awaiting this game.' 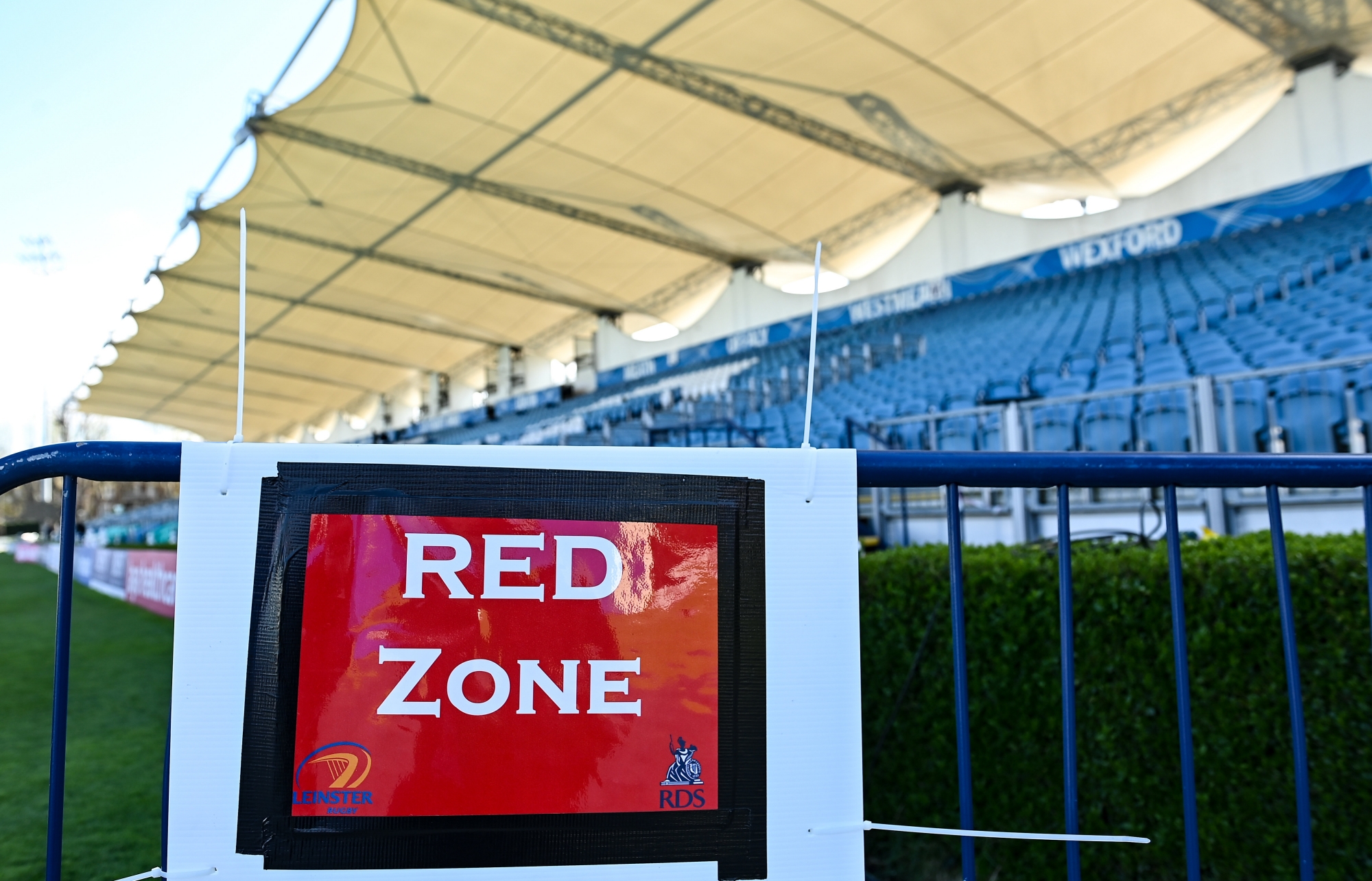 A general view of stadium signage at the RDS Arena in Dublin, following the announcement that the Heineken Champions Cup Round of 16 match between Leinster and RC Toulon is cancelled due to a positive COVID-19 case. (Photo by Brendan Moran/Sportsfile)
Advertisement

15 minutes later, the EPCR released a statement of their own. It reads:

'Following a meeting by video conference of a Match Day Medical Risk Assessment Committee comprising medical leads from the unions, league bodies and both clubs, with input from the public health authorities in Ireland, it has been decided to cancel the Heineken Champions Cup, Round of 16 match between Leinster Rugby and RC Toulon which was scheduled for this evening (Friday 2 April) at the RDS Arena.

'The committee, which received independent medical advice from Dr Brendan Payne (England) and Dr Daniel Koch (Switzerland), was informed that an RC Toulon player, who did not travel to Ireland, had tested positive for COVID-19 as part of the club’s routine testing.

'Although the RC Toulon players and staff who had travelled undertook an additional round of PCR testing in Dublin yesterday (Thursday 1 April) which revealed no positive results, the committee concluded that there were a number of high-risk contacts with the player who had tested positive and deemed the match unsafe to play with the participation of those identified contacts.

'Having been notified of that position, RC Toulon informed EPCR that they could not select a match day squad to safely fulfil the fixture.

'Having explored all possible alternative arrangements to facilitate the staging of the fixture, it was decided that the match could not be played safely given both the current public health guidelines in Ireland and EPCR’s COVID-19 protocol.

'A Match Result Resolution Committee will be convened as soon as practicable to determine the outcome of the fixture.'

So, as of this afternoon, Leinster are still awaiting news on whether they have advanced to the next round of the knock-out stages.


popular
"It’s hard not to respect Johnny, even if you don’t like him!" - Dan Biggar
Quiz: Which footballer has played more times for Ireland?
Martin McHugh: Them lads were stronger than the modern day player who's lifting weights all the time and doing no manual work
"I was in the Blackrock end goal looking up to the heavens saying, "Get us through it" - Kerins following his late father's footsteps
Dessie Farrell set to cut large chunk of Dublin players as panel is reduced for league campaign
Sky Sports presenter explains why Roy Keane and Graeme Souness are so critical of players
"I missed two senior championship games in the Gaelic and it was eating me up inside" - Bradley-Walsh getting a lot done
You may also like
1 day ago
Ireland fitness update offers even more reason for Six Nations optimism
2 days ago
"I have to come into this camp and do what I can to get the No.2 jersey" - Rob Herring
3 days ago
"I had a point to prove" - Conor Oliver on choosing Connacht over Leicester Tigers
3 days ago
"It must be difficult to say no, having won a game and heading back together"
4 days ago
Irish provinces learn Last 16 opponents after hectic Champions Cup finish
4 days ago
Simon Zebo sets European record as Munster set for English opponent in Last 16
Next Page