Each day, Europe's elite rugby players put away a huge amount of food

Ahead of this weekend's Champions Cup Final, we spoke to a nutritionist from the two clubs in action - Saracens and Leinster Rugby.

Fuelling the two best clubs in Europe is a difficult task, but one that Daniel Davey and George Morgan are responsible for.

Leinster's Davey explains, among other things, how he handles vegetarians and the differences a player's position makes. Saracens nutritionist Morgan provided a full game day diet plan that you won't find anywhere else.

JOE: How does a top rugby player's diet differ from that of the average person?

This is obviously very different to the average person's recommended 2000 calorie diet.

How does a match day meal plan differ to a less intense day's diet?

END_OF_DOCUMENT_TOKEN_TO_BE_REPLACED

"The big difference is the need for carbohydrate intake. If the players are doing a demanding, high intensity session then more carbs will be required - which they will get from foods such as fruit, porridge, potatoes etc.

"We've seen a big change in culture and tradition around match day. Our players are now eating less on game day with smaller, lighter pre-match meals. There is now more emphasis on the pre-game day fuel up period."

Does a player's position alter their nutrition plan?

"The difference in player weight ranges from 80kg for a scrum half, to some of the props who can be 125kg - so the position definitely affects nutrition in terms of calories and macro-nutrient needs.

"A scrum half for example will be covering high intensity, high volume, high distance so carbohydrate needs will be more significant and contribute greater to energy intake. Whereas larger players will have bigger contribution from healthy fats and as much as 250g of protein."

Are there any vegetarian or vegan players you look after? If so, how do you ensure they get enough protein? 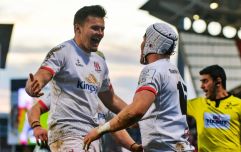 END_OF_DOCUMENT_TOKEN_TO_BE_REPLACED

"We have one pescatarian at Leinster, but there are plenty of ways they can get enough protein. They understand that they can get higher protein intake from plant-based foods such as beans, lentils, tofu, nuts and seeds along with the Optimum Nutrition Gold Standard Plant protein supplement."

Vegans can combine beans, lentils and tofu in order to get enough protein

In your view is there such a thing as a 'superfood'?

"There are foods with very different nutrient values and foods with varying antioxidants and minerals, but I would never categorise any food as a superfood and put it above another. Variety is the most important thing."

Would you recommend the Keto Diet for athletes or people strength training?

"No. Keto has its place for certain health conditions, but there is not enough evidence to suggest it improves performance."

The Ketogenic Diet has not been found to boost sports performance

Optimum Nutrition are proud to supply nutrition to Leinster and Saracens rugby clubs.