Tommy Bowe to retire at the end of the season

Dogged by injuries, it's been a tumultuous career twilight for one of the nation's favourite sons.

On Monday evening, after a senior career that spanned 15 seasons, 69 international games and two Lions tests, Tommy Bowe confirmed that he'd be bowing out after one last fight. 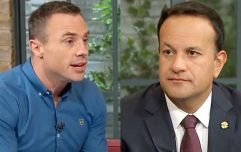 END_OF_DOCUMENT_TOKEN_TO_BE_REPLACED

The Ulster trailblazer had been planning to break back into the Ireland team again this season but, after playing against Leinster in the interpros this winter, he was hit with another eight weeks on the sidelines with a shoulder injury.

Multiple knee surgeries, a broken foot and trouble with his groin have all taken their toll in recent years as one of the country's most electrifying backs stalled after producing some of the finest moments in green.

And, with his IRFU contract expiring in 2018, Bowe has decided to let his contract run out and say goodbye at the end of it. His message was simple, but poignant.

I’ve spent most of my career in Belfast,
At first George said I wasn’t very fast,
I eventually found my gears,
Had some incredible years,
But it’s time to tell you - this is my last! pic.twitter.com/KZa8Rwk4G1

END_OF_DOCUMENT_TOKEN_TO_BE_REPLACED

It means the 33-year-old will have to sit and watch on as Ulster try to rescue their Champions Cup campaign this weekend. If they lose, they are out and there will be no fairytale swan song for the Monaghan native.

Whatever will be, Tommy Bowe will be remembered as a thriller. He lit up Lansdowne Road, he shook Ravenhill, and he inspired a generation with some of the most memorable moments.

Winning the Grand Slam in 2009

For Tommy Bowe though, there were so many moments. His career can't last forever - but his magic will.