TJ Perenara's post-match gesture to Bundee Aki was all class

Ian 'Fozzy' Foster may have worded it awkwardly, last week, but he was referring to how Bundee Aki had acclimatised to the Irish style of playing rugby.

"He plays the Irish way," said the All Blacks assistant coach. "There will be a couple of our guys who have probably played with him and know him personally but we are kind of getting used to that."

A nice little dig at Ireland and World Rugby's 'Residency Rule'. Aki is not the first Kiwi to line out for Ireland in recent years and may not be the last, even if it will soon take five years of playing in a country to qualify for their rugby team.

Aki is four years in Ireland and has made a home for himself and his family in the west of Ireland. If he is playing the Irish way it is with flashes of that deadly Kiwi insouciance and, when needed, steel. He can switch his game from class to smash in a heartbeat.

On Saturday at the Aviva Stadium, Aki was on the other side of the pitch from his countrymen as the Haka loomed. He was in the midst of his new teammates and brothers, for he is fully committed to the Irish cause and has earned his place in this team.

It was no mistake to see Aki stationed in the centre of Ireland's 23-man squad. In between Josh van der Flier and vice captain Johnny Sexton, with Rory Best and Peter O'Mahony the next men over, it was a clear signal from Ireland that the Connacht centre was one of them.

Aki stared the Haka down and stepped forward with the rest of the Irish team to meet the challenge that was being laid down. The crowd went bananas.

He came in for some big hits from the likes of Ryan Crotty and Liam Squire but Aki was still out there and meting out some lusty blows of his own. 18 carries (second only to CJ Stander) and nine tackles sunk in, it was an all-action performance.

At the final whistle, with Ireland victorious, there were no hard feelings and several All Blacks stars - including Damien McKenzie (below) - stopped to congratulate Aki and wish him well. 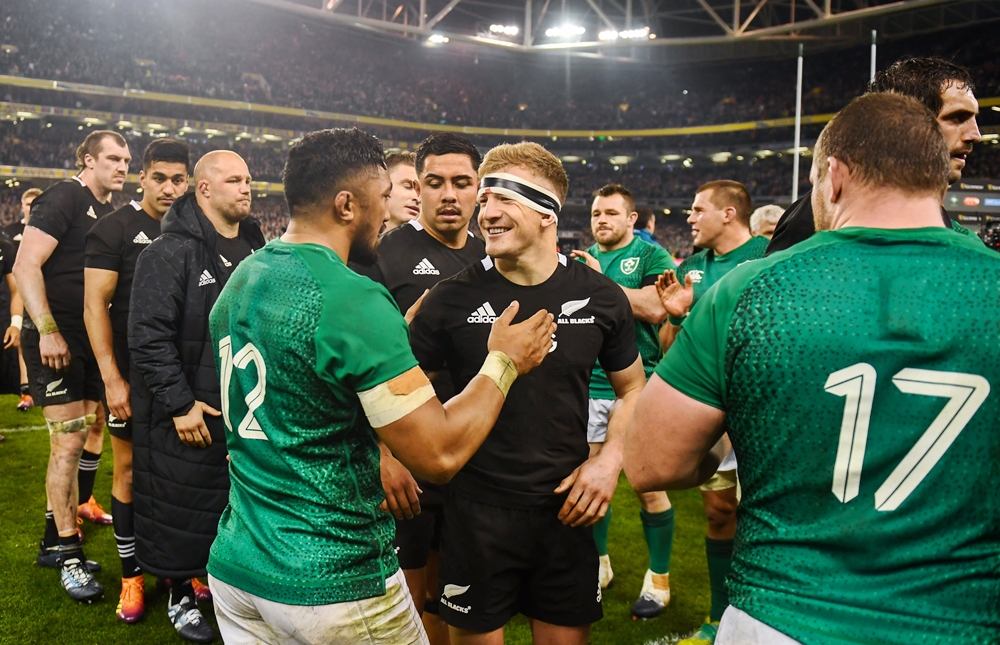 END_OF_DOCUMENT_TOKEN_TO_BE_REPLACED

Having played, and won a Super Rugby title, with Waikato Chiefs, the likes of McKenzie and Brodie Retallick shared some friendly words with Aki.

However, it was Hurricanes scrum-half TJ Perenara that went a step further. Perenara jogged towards Aki not long after the full-time whistle sounded and performed a Hongi - touching forwards and noses together as a sign of respect.

The Maori tradition was a small but heartening moment, and a moment of calm as bedlam erupted in the stands and on the pitch.

He also paid dues to the beaten New Zealand side, by writing:

'THIS TEAM IS SPECIAL. The crowd was on a whole new level it was unbelievable! Massive respect to the All Blacks boys.'

TJ Perenara and Bundee Aki with one of the moments of a big sporting weekend.


popular
In 86 seconds, Patrick Bamford becomes English football's voice of reason
'Make him hurt, make him yours' - How the Springboks ruled the world
Springboks legend Tendai Mtawawira tells us what he really thinks of Ellis Genge
Jose Mourinho is the picture of happiness and health after Spurs sacking
'Beast' Mtawawira is a big fan of Mike Ross' Lions front row
"We did find him hours later and we made up." - How Flynn and his best friend came to blows in Croke Park
Jose Mourinho is about to step up and become the hero football needs
You may also like
5 days ago
The six Lions spots being contested by Ireland and Scotland players
5 days ago
Rating the chances of Leinster's 16 Lions hopefuls
6 days ago
Jamie Carragher on how close he came to Ireland call-up
1 week ago
Full player ratings as Ireland dismantle Wales in Six Nations opener
1 week ago
Munster and Irish rugby almost lost out on one of their brightest stars
1 week ago
"I wake up in a cold sweat. I cannot, for the life of me, remember where my jersey is"
Next Page