The first episode of Trasna an Líne was thoroughly enjoyable and the second should not disappoint.

TG4's Trasna an Liné [Across the Line] is the sort of sporting documentary that we would love to see more of in this country.

Great access, an interesting topic, engaging characters and some class story-telling and videography all combine to make this rugby documentary - told in both Irish and English - well worth a watch. 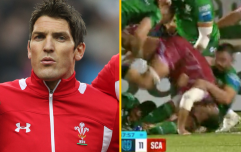 END_OF_DOCUMENT_TOKEN_TO_BE_REPLACED

The first episode of the two-part doc, which follows up and coming rugby players on their journey to success, aired last week and the conclusion will be available for all to see this evening.

'Viewers are at the heart of the action and witness major make or break moments through the eyes of young players trying to reach the top and the challenges they face along the way. We see players suffer career threatening injuries; the heart ache of defeat and joy of victory. All this happens as they players must balance work, studying, training while trying to make it to the top.

'Fans only see rugby players for 80 minutes at that big game once a week. ‘Trasna An Líne’ captures the reality away from the allure of match days. This series brings us behind the scenes witnessing their punishing training sessions and capturing the hours of tortuous physiotherapy.'

While the ladies must juggle work and rugby commitments, the young men at Connacht and Ulster are chasing the dream of being professional rugby players for their province and for Ireland.

A few of the stand-out moments involve injury and heartache as bodies, and wills, are pushed to the limits.

END_OF_DOCUMENT_TOKEN_TO_BE_REPLACED

There is another charming scene of 18-year-old Connacht Rugby hopeful Colm de Buitléar working a Saturday shift in his local petrol station while opening up on his dreams of great rugby deeds.

The teams at TG4 and BBC Alba were given fantastic access to the teams involved and certainly picked some subjects that we want to see do well. This is one sports documentary it is definitely worth watching.