We need to talk about the Six Nations winners' medals.

There is clearly some sort of fundamental flaw in the 2018 Six Nations medals. They simply are not built to stay around jubilant rugby players' necks.

Maybe the medals are too heavy, maybe the ribbons aren't tied properly, but the evidence is plain for all to see. They are not fit for their purpose. If you're lucky enough to get to wear one, make sure you keep both eyes on it. Those priceless discs can go missing as quickly as they arrive.

Just ask Johnny Sexton, or Tadhg Furlong, for that matter. 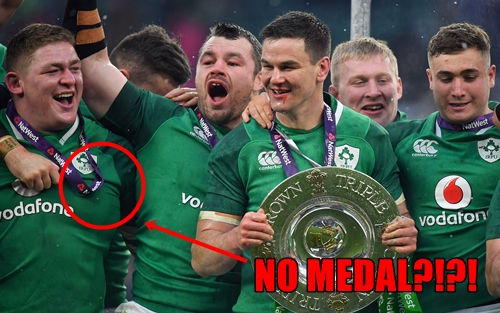 We've all seen the footage of a bemused Sexton realising he lost his medal in Twickenham. If you haven't you can check it out here.

What you may not have realised is that Sexton wasn't the only Ireland player to lose his medal in Twickenham. For a brief period, Furlong's also went missing.

As Conor Murray planted a big fat one on the trophy and raised it in the air, Furlong could be seen scanning the ground in the background. With the weightless ribbon in his clutches, he was frantically trying to find what was once attached to it.

END_OF_DOCUMENT_TOKEN_TO_BE_REPLACED

He only had the medal on about two minutes when he misplaced it. The slow-motion replay of the celebrations showed the exact moment when it came loose.

When the pyrotechnics went off and the champagne started spraying, Furlong and his teammates began jumping for joy.

Seemingly, his leap was a little too energetic as it caused his medal to come loose and fall to the Earth. The Wexford man was so focused on enjoying himself, he didn't even notice it go.

Fortunately, this story has a happy ending. That on-field search didn't last long. The medal was found and all was well.

Furlong was proudly wearing it in the dressing room once the players left the field.

Thank fuck for that!

popular
The SportsJOE 12 o'clock quiz | Day 369
"The guy's a genius. He is one of the greatest players of all time" - Roy Keane
Hammer-blow for Mayo as O'Connor to go under knife for Achilles injury
Ronaldo removes Coke, shows off the drink of champions in pre-match conference
Cristiano Ronaldo snub wipes billions off Coca-Cola’s market value
Paul Pogba does a Cristiano Ronaldo on it, Heineken gets the nudge
When Roy Keane calls a tackle "an assault", you know it must be bad
You may also like
1 day ago
Can't imagine Rangers fans were happy about what Ronnie Whelan called Scotland
1 day ago
Damien Duff bides his time before roasting the FAI with 'motivational video' comment
1 day ago
Ireland XV Andy Farrell should pick for Test clash with Japan
2 days ago
Andy Farrell makes bold outhalf calls after Johnny Sexton excused from duty
2 days ago
11 uncapped players named in Ireland squad for summer Tests
5 days ago
Ireland's 2009 Grand Slam stars recall closest call in our rugby history
Next Page