Ronan O'Gara has helped guide Crusaders to their second Super Rugby title in as many years.

The Munster and Ireland legend left Paris after four-and-a-half seasons with Racing 92, to take up a position as an assistant coach with the New Zealand outfit.

Just eight months into his tenure, O'Gara has taken to Super Rugby like a duck to water. This was Crusaders 15th win in a row, and indeed they did look unstoppable heading into the final.

Their opponents where The Lions, of South Africa, and the game took place in AMI Stadium in Christchurch, which is the Crusaders' home venue.

Everything pointed to a Crusaders victory in the build-up to the game. They had the home venue, the winning record, and were heavy favourites to lift a second title in a row.

They did not disappoint as they ran out comfortable winners in the end on a scoreline of 37-18.

The Kiwis were the dominant side from the get-go and ended the first half 17 points ahead (20-3). They continued to exert their dominance into the second period, but The Lion's team never gave up and twice managed to close the gap on O'Gara's side. Ultimately, their superiority told in the end as they continued to tag on scores to make it look like a comfortable victory. 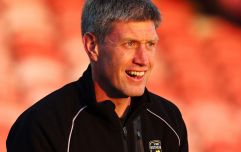 END_OF_DOCUMENT_TOKEN_TO_BE_REPLACED

This Crusaders side currently house many players who are expected to be named in the All-Blacks side for the upcoming Rugby Championships. They take on Australia in the first game of the series on August 18th.

However, it was a couple of old All-Blacks and Crusaders stars who were happy campers watching on this morning.

A couple of old boys happy with that result, well done @crusadersrugby pic.twitter.com/4PNcFrrr9X

Congratulations to Ronan O'Gara and everyone involved with Crusaders Rugby.